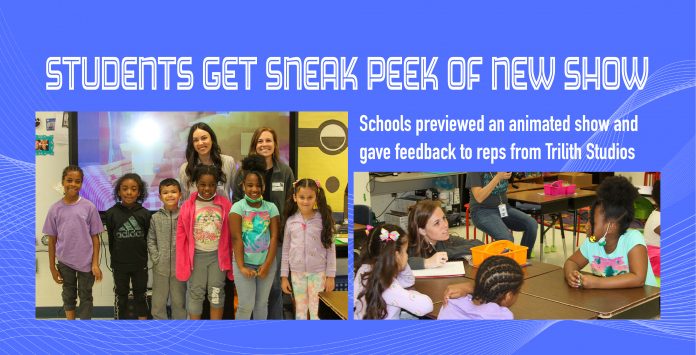 When the makers of a new animated kids show wanted feedback for their creation, they turned to students from Fayette County Public Schools for their expert opinion.

Cozmo and Friends is a fun and educational new series about robots with lots of focus on STEM and coding in particular. Students watched a few segments of the show, then split into small focus groups to give their feedback on what they liked and didn’t like.

Among the local viewers were students in Jennifer Borngesser’s gifted program at Fayetteville Elementary. Her students thought the show was “fun” and “cool,” and they thought Cozmo was funny. Borngesser said they wished they had access to robotics like in the show.

“We wanted to get real feedback from kids in our target age range before launching the show officially,” said Brittany Stone, Brand Developer with Trilith Studios. “The students we spoke with were incredibly helpful with their opinions!”

Since the visit, Cozmo and Friends officially launched. Episodes are available on YouTube.

Rabold wins another school board term; E-SPLOST roars to victory