Plenty of space expected for vehicles dropping off, picking up students —

Despite criticism from the Peachtree City Council about potential traffic backups at the new J.C. Booth Middle School now under construction, the new site has plenty of “stacking space” for parents’ vehicles, according to Assistant Superintendent Mike Sanders.

“There won’t be a backup onto Highway 54,” Sanders told the Fayette County Board of Education last week. “We have 2,500 linear feet of stacking space for vehicles on our property.”

Sanders showed the board a chart with these points:

• ”We have the ability to have in line an additional 25 to 30 vehicles on the Carriage Lane Connector Road,” Sanders said.

• Of the 20 buses serving the new school, 2 would need to turn left onto Robinson Road, while 18 would turn either left or right onto Hwy. 54 or straight across onto Walt Banks Road, Sanders said.

Under no scenario does Sanders see new Booth traffic backing up onto Hwy. 54, he said.

Construction is well underway on the replacement for the current school — $15.8 million of the projected $46 million costs has been spent so far — with completion expected by December 2021, Sanders told the board. The new school will have 95 classrooms, he said.

Currently, the new school will have two access points: a two-lane neighborhood road, Carriage Lane, which opens onto Ga. Highway 54; and a currently unpaved private road, Stagecoach Road, which opens onto Robinson Road.

Meanwhile, the system is still negotiating with the Georgia Department of Transportation about modifications to the intersection of Walt Banks Road-Carriage Lane with Hwy. 54, Sanders said.

In other school matters, he also indicated that any plans to re-open the closed Tyrone Elementary School are on indefinite hold. “It would take $8 to $9 million” in renovations to open it up, Sanders said.

The alternative is a “shovel-ready” addition to Kedron Elementary, Sanders said.

The assistant superintendent also reported that no final decisions had been made about upcoming graduations at the county’s five high schools, pending more certainty about the course of the Covid-19 pandemic, which postponed last year’s graduations. 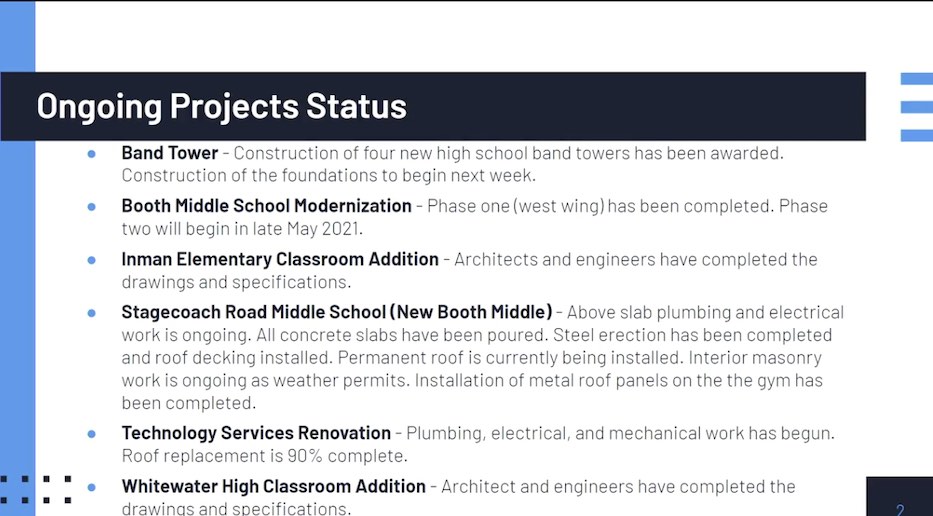