Dispatchers at the Fayette County 911 Center on Feb. 19 knew they would be getting a four-legged visitor. The surprise they learned about after the female pit bull mix puppy arrived was that it would have a temporary home at the center for the next few weeks as part of the new “Headset Heelers” program initiated by the 911 center and the Fayette County Animal Shelter.

Smith named the joint venture “Headset Heelers,” said Fayette County Clerk Tameca White, who noted the idea that the program would have the two departments teaming up to improve the mental wellbeing of the 911 communications officers and reduce the stress of animals at the animal shelter due to physiological and behavioral adjustments, helping them cope with their new environment. .

“Amber talked about it and ran with it,” said Vogt. “Then she began talking with Jerry (Collins).”

For her part, Smith said bringing the puppy into the center made sense.

“The 911 profession is difficult and stressful. Animals help reduce the stress,” Smith said. “It is so nice to see the Headset Heelers program become a reality. The
mental health of our 911 dispatchers is a top priority and I look
forward to seeing the positive impact this will have on these unseen
heroes.”

She and Collins both noted how the exposure will benefit dispatchers by alleviating some of the job stress, and help the puppy who will benefit from the socialization.

It was Collins who recommended the 6-8-week-old female pit bull mix puppy who is now calling the 911 center its temporary home for the next several weeks until she is old enough to be spayed and ready for adoption.

The 911 dispatchers on duty Wednesday afternoon knew the puppy was coming, but they thought it was coming for a brief visit. The surprise came when they were told it would be staying for a few weeks.

Dispatchers not taking calls took turns holding and playing with the puppy, who is expected to get a name in the coming days. 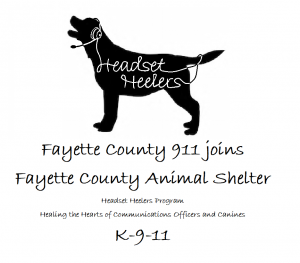 The puppy soon received a name – “Eleven” or “Ellie” for short. In dispatch lingo the code for animals is 10-11.

Dispatcher Ashleigh Sawyer was one of the dispatchers who helped the puppy start getting acclimated to its new surroundings, even holding the puppy on her lap at the console.

The animal shelter is providing a kennel and food for the puppy during its stay at the 911 center.

Collins said it turns out that the puppy came to the county animal shelter by way of a Good Samaritan who found her at the Fayette Pavilion and brought her to the shelter.

Collins noted that the puppy’s placement at the 911 center was a win-win for everyone.

Fayette County Public Safety Chaplain Frank Mercer said the idea of including a dog in the dispatch area was a good one.

“Dispatching is a really hard, stressful job,” Mercer said. “Whatever emergency happens, it all comes here.”

Introducing Headset Heelers received approval from County Administrator Steve Rapson and Human Resources Director Lewis Patterson before bringing a dog to the center. Vogt was advised that she needed to get 100 percent acceptance from all employees in her department to ensure there were no health risks or a fear of dogs. Getting 100 percent cooperation of anything is almost impossible, but in this case all current employees as well as individuals in the hiring process for 911 were on board, said White.

“It is the hope of both departments that this new program will be an ongoing venture that both humans and animals will benefit from ‘Healing the Hearts of Communications Officers and Canines,'” White said.