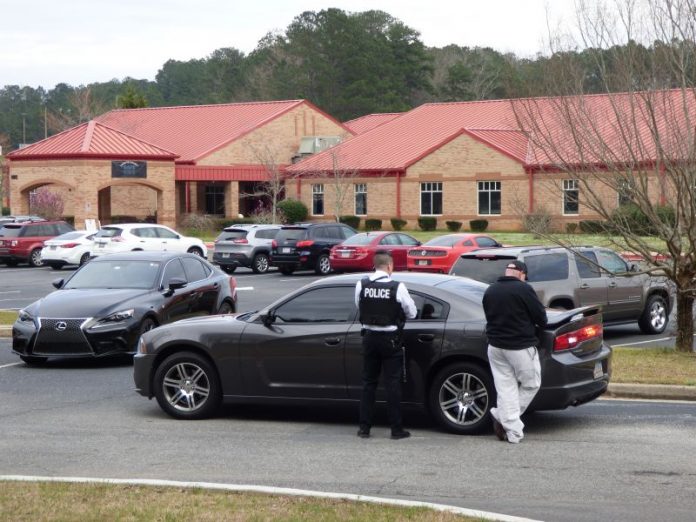 Spring Hill Elementary in Fayetteville was evacuated Monday afternoon while officers searched for a man who entered the school after classes had ended. The man was not located and no one was injured in the evacuation. Photo/Ben Nelms.

Spring Hill Elementary School in Fayetteville was evacuated Monday afternoon as a precautionary measure after an unknown man was seen in the school after classes had ended. The school was subsequently cleared by officers and deputies, and the man was not located.

Fayetteville Police Department spokesman Chad Myers said the events of the afternoon began at the former Fayette Middle School, now the site of the alternative school, on Grady Avenue when a man described as a black male wearing a name badge tried to enter the school.

Staff would not let him in the school and, when attempting to close the door after his request to come in, the man put his foot in the door, Myers said, adding that staff slammed the door on him.

Spring Hill staff were notified when the man exited the parking lot and drove down the access road that leads to the nearby Spring Hill Elementary.

Classes had ended at Spring Hill and the buses had already left the school to take children home, Myers said.

Myers said the man entered the Spring Hill building through an open door at 2:58 p.m. and was picked up on school video as he entered the school.

The few remaining children, along with staff, were evacuated out of an abundance of caution as Fayetteville police and Fayette County deputies arrived at the scene, Myers noted, adding that the man was not found and school was cleared at 4:35 p.m.

Contrary to some social media postings, Myers reiterated that there was no gun observed in connection with the man who entered the Spring Hill building.

Myers said no one was injured in the evacuation.

Myers reported that someone matching the man’s description arrived at the the school system’s central office building on Stonewall Avenue Monday afternoon inquiring about becoming a vendor for the school system.