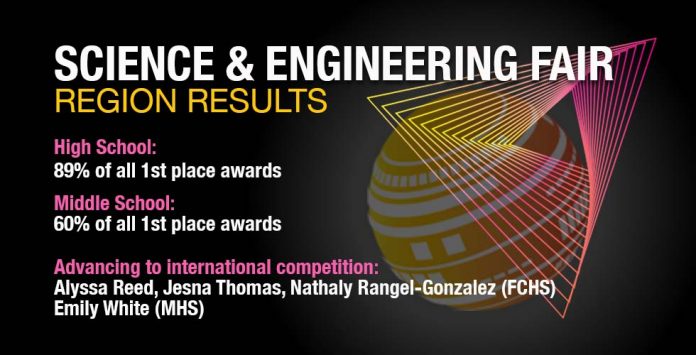 The competition did not stand a chance against the young scientists from Fayette County’s middle and high schools as they racked up the awards at the 2022 Griffin RESA Regional Science and Engineering Fair.

This marks the third consecutive year that the Griffin RESA region will be represented by mostly Fayette County students at the Georgia Science and Engineering Fair March 31-April 2 in Athens, Georgia. High school students took 89 percent of the first place wins in the senior division, and middle school students secured 60 percent of the first place victories in the junior division. Only first place winners advance to the state competition.

Also for the second consecutive year, Fayette’s high school students secured all three of the region’s top awards, automatically advancing them to the Regeneron International Science and Engineering Fair in Atlanta May 7-13. Alyssa Reed, and the team of Jesna Thomas and Nathaly Rangel-Gonzalez, all from Fayette County High; and Emily White from McIntosh High, will represent the Griffin RESA region at the international competition. Only 1,800 students from around the globe can earn the right to compete at the international level where nearly $5 million in awards is up for grabs.