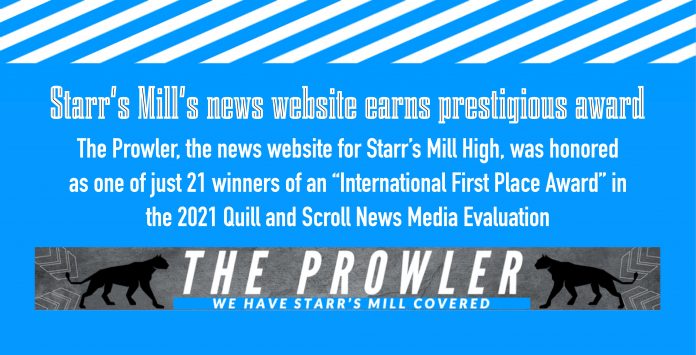 The Prowler, the news website for Starr’s Mill High, continues adding to their lineage of prestigious honors. Recently, the staff was honored as one of just 21 winners of an “International First Place Award” in the 2021 Quill and Scroll News Media Evaluation.

Earning an International First Place Award means The Prowler has received at least one “Superior” and at least one “Excellent” rating in the four or five areas for evaluation, with the other areas rated “Good.” The Prowler, as a news website, was rated in four categories, earning Superior in General Practices and earning Excellent in Coverage, Writing and Editing, and Visuals.

Quill and Scroll International Honorary Society for High School Journalists has encouraged and recognized the brightest student journalists since their founding in 1926.

Follow The Prowler’s coverage of everything Starr’s Mill at theprowlernews.org.