A virtual meeting of community members on the re-opening of Fayette County schools for the coming school year was held June 17. The idea was to hear from some of those in the community who might want to learn about the plans, and potential plans, for the re-opening of schools in August.

A graphic prepared by the system compiling the options being considered for different grade levels is below. 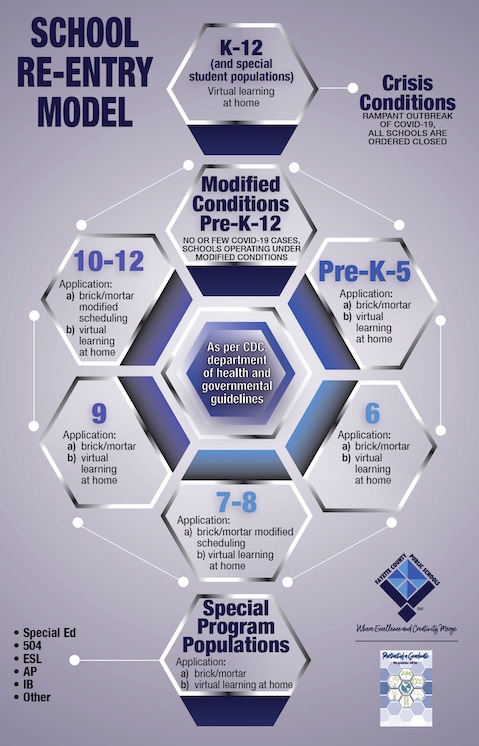 In all, 27 people participated in the virtual meeting, with a significant percentage of those being school system employees.

The school system has been working, and continues to address, the re-opening of schools for the 2020-2021 school year, said Superintendent Jody Barrow.

Though many of the variables relating to school re-opening are being worked through, Barrow said there are things that are known.

One of those is that school will begin Aug. 10. That decision was made earlier in the week on a unanimous vote by the school board.

Another thing known is that the school system will need the help of staff and the community, Barrow said.

It is also known that Covid-19 will still exist once school begins, with a vaccine unlikely by fall.

Barrow said it is hoped that face-to-face graduations from the school year just ended can occur on Aug. 1.

When it comes to re-opening, Barrow said the school system has two options.

Option 2 would have full virtual learning.

Barrow said there is also the potential for a hybrid approach that could be forthcoming — something in between those two polar choices, and that’s the purpose of surveys.

Barrow said multiple surveys have been conducted with students, teachers, principals and the community.

Central to the re-opening is to get input from parents. To that end, Barrow said parents will be surveyed next week to see which of the options they want.

The plan is to return to the traditional school approach, but based on what parents choose, Barrow said, adding that, even with the traditional approach, a number of precautionary practices, such as social distancing and “grab-and-go” for meals, could be put in place.

Barrow said assumptions to consider for the new school year included variables such as:

1) The goal of social distancing measures in schools to mitigate the spread of the virus.

2) The goal is to keep the contagion to a minimum with the focus of protecting those most vulnerable.

3) We can not ignore the economic imperative of allowing parents to go back to work.

4) Our plan must be affordable.

5) Teaching and learning and how that impacts student outcomes will continue to be essential.

6) We have to give up the luxury of our past routines and embrace that our practice, going forward, will look different.

Barrow said the school system is still analyzing those assumptions while taking into account the various measures outline in CDC guidelines, such as keeping desks six feet apart, using one-way routes in hallways, having one child per seat and skipping rows on school buses and no student sharing of items or supplies.

There were also several questions from those attending the virtual community meeting.

Assistant Superintendent of Operations Mike Sanders responding to a question about air quality said the system is looking at those issues and would like to have additional information. Barrow added that the state school working group is also addressing air quality issues, including on school buses.

A similar question arose about testing for staff. Those staff with symptoms are likely to be tested, with King adding that parents and staff are encouraged to take temps each morning. Whether a fever or other Covid-19 symptoms present, the best course of action would be to stay at home, King said.

On another health-related question about personal protective equipment, Sanders said the school system has a large order in place and continues to look for alternate vendors of those supplies.

Assistant Superintendent for Student Achievement Julie Turner near the end of the meeting discussed virtual learning as it occurred during the spring and how that learning would differ in the fall.

During the spring, teachers were largely covering the old material from earlier in the year. Once school begins, more time will be needed to build relationships along with teaching the new content being covered, Turner explained.

With virtual learning going forward, Turner said she expected attendance requirements for students to be put in place, with more student accountability when not interacting with teachers.

Barrow at the end of the meeting noted that the beginning of the school year will be harder, but, “We won’t lower the bar for student achievement.”