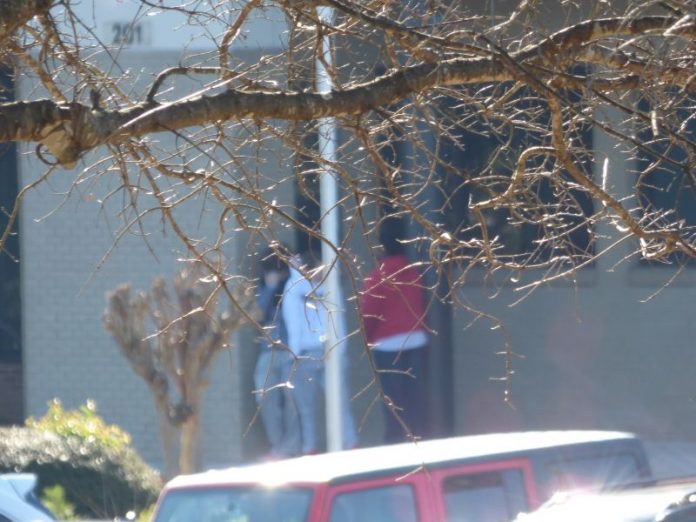 A small group that appeared to be students assembled outside McIntosh High School on March 14. Photo/Ben Nelms.

The student memorial and protest for 17 minutes beginning at 10 a.m. on March 14 was expected to be a nationwide event.

At McIntosh High School in Peachtree City, a small group that appeared to be students assembled briefly at the flag pole in front of the school shortly after 10 a.m. Other students were reported to be assembling in the school’s courtyard area.

The Citizen will provide updates on the events that occurred in Fayette County.

Students across the nation were expected to participate in 17 minutes of silence to serve as a memorial to the students who died in Florida and to protest gun violence.

A comment by the Fayetteville Police Department on its Facebook page noted that it was “aware of a social media post circulating online in reference to a threat of a school shooting, should the walkout occur (on March 14). Our school resource officers have identified and made contact with the student involved and have determined that no credible threat exists at this time. Out of an abundance of caution, the Fayetteville Police Department will have a heavy police presence throughout the day to ensure the safety of our students and teachers.”

The Peachtree City Police Department on its Facebook page is challenging parents to share their children’s acts of kindness, including posting photos.

Responding to a parent question, Superintendent Jody Barrow in a March 14 letter said, “I actually believe in our young people and our school-based administration. I believe because of our mutual prior planning and conversation that today will be a meaningful day in our schools throughout our system. Rather than focus on the difference of opinions and/or political views, I choose to focus on the common ground that I think we can agree on. First and foremost, the safety and security of our children and our staff is of paramount importance. We will do everything in our power to ensure that type environment is maintained, always. The primary focus of our schools should be focused on high quality teaching and learning. I very much value ‘student voice’ and when and where appropriate we need to help our students understand their rights and also their responsibilities and how to exercise their practice in a civil manner.”

In a related matter, students at Whitewater High School will host a student-led forum on school safety on March 26 at 6:30 p.m. in the auditorium at 100 Wildcat Way. A number of elected officials have been invited.