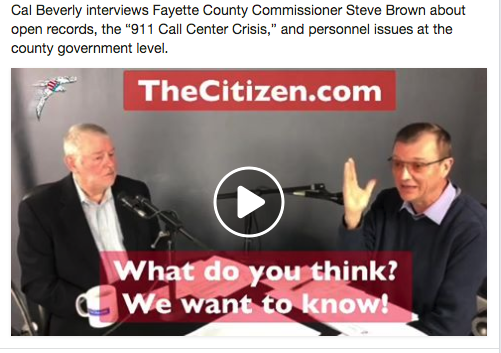 During an extraordinary called meeting Wednesday at 1 p.m., Fayette County Commission Vice Chairman Randy Ognio and Commissioner Steve Brown shouted at each other several times during an acrimonious one-hour session with one agenda item: To require all commissioners to follow all 108 county policies governing employees. [Click here for the video stream from the Wednesday meeting. It lasts about one hour.]

Ognio objected to Brown accessing the personnel file of Bernard J. Brown (no relation), the director of the county-operated 9-1-1 Communications Center.

Brown responded that he broke no county policy and followed state open records laws in copying a disciplinary action taken last February against the 9-1-1 director.

Commissioner Charles Oddo agreed with Ognio that no single commissioner should have “unfettered access” to county employees’ personnel files.

Commissioner Charles Rousseau agreed with Brown that the county faced a “crisis,” but called for a cautious approach to any fixes, warning of “unintended consequences.”

Ognio several times objected to Brown’s attempts to bring up the reasons why he was seeking disciplinary files, saying at the outset, “This is my meeting,” and that the topics to be discussed were to be confined to the one agenda item about all commissioners following county policies.

In response Brown read a statement into the record that criticized County Administrator Steve Rapson for allegedly operating independently of all oversight and questioned ”whether he recognizes any authority at all.”

“I honestly do not think that he understands that the subordinate relationship is reporting to all five commissioners,” Brown said.

“At our Dec. 14, 2017 Board of Commissioners meeting, a handful of former county employees from the 9-1-1 call center … reported abuses and a toxic work environment much like the female road crew members did a year prior (both hidden from commissioners by the county administrator)” Brown said.

“There has been a lot of concern about the 9-1-1 Call Center due to an excessive turnover rate. The Board of Commissioners has put a lot of emphasis on redressing issues facing the flagging department and approved additional funding, making our 911 employees the highest paid in the state. The board also approved a new $18 million radio system,” Brown said.

“Obviously, the 9-1-1 service is a critical function and has a direct effect on the health and safety of our citizens. Imagine the shock when the commissioners discovered that the harmful activity within the department, a Human Resources investigation, terminations and the exodus of staff over a one-year period was all covered up and withheld form our knowledge,” Brown said.

The disciplinary form from Feb. 20, 2017, is about 9-1-1 Director Bernard Brown: “On Thursday, Feb. 9, 2017, Mr. Brown became involved in a verbal confrontation with 9-1-1 Supervisor Dana Edwards during which he became very agitated and used profanity several times towards Mrs. Evans.”

The files continues, “Mr. Brown failed to maintain his composure and did not act in a professional manner. This type of conduct between county employees at any level is unacceptable. In addition to receiving a written reprimand, Mr. Brown and all of his supervisors will be required to complete team building training. Any further issues with Mr. Brown’s conduct will result in further disciplinary action up to and including termination.”

Brown said he was refusing to be intimidated by Ognio and Oddo “regarding what is going on behind the scenes in government. This meeting today is nothing but an attempt to further obstruct the effort to get information out to the public regarding situations that every taxpayer needs to know.”

As to why such alleged “deflection and intimidation” was happening, Brown said, “All I can do is speculate as to why critical information related to our local government is withheld from people like Commissioner Rousseau and myself. My speculation is there a deep-seated fear the two of us will not stand still and let the abuse happen and we are not afraid to demand transparency and a unprejudiced, objective resolution.”

Brown warned, “Uninhibited power in government at all levels is the breeding agent for corruption and abuse. Nothing kills our republican democracies like uninhibited power and the lack of accountability.”

The documents he has released to news media, Brown, said, “are publicly eligible [under state law] and both are acknowledgements of some of the horrendous behavior that our employees have had to endure, behavior and other actions that were purposefully withheld from some of the commissioners.”

“I am deeply concerned that we have government officials actively engaged in cover-ups of government abuse,” Brown concluded. “We can prove that vital information has been purposefully withheld from certain county commissioners, the highest-ranking officials in the county government, the ones who have equal authority and responsibility, all of whom must receive equal communication from the county administrator.”

Ognio defended his efforts to encourage the commissioners “to lead by example” by following the same processes and procedures required of the employees.

Brown responded that he had followed current county policy and state law “to the letter” and planned to begin his own process opening up “a river of documents. Get ’em all out there” in coming weeks.

Rousseau advised the board to slow down and get expert input. “We have a crisis, people. We’re trying to deal with it openly and honestly.”

The official outcome of the meeting was a 4-to-0 approval of Ognio’s motion that was modified by Rousseau’s cautions.