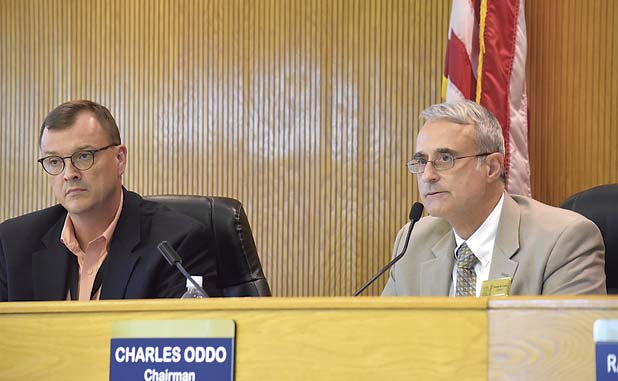 New Commissioner Maxwell expected to be swing vote, and he’s not talking
Will Charles Oddo have the votes to prevail, or will the new commissioner swing it for Steve Brown? Or will a surprise compromise candidate emerge?
Those questions loom over a busier than usual New Year’s week for the Fayette County Board of Commissioners.
The board’s regular meeting schedule is not changing this year, with the second and fourth Thursday of the month remaining the status quo. But one important meeting scheduled for this week necessitated the scheduling of another.
The annual organizational meeting, usually conducted right before the first regular January meeting, is set for Jan. 5 at 6 p.m. It will be called to order by County Attorney Dennis Davenport, with the first item of business being the installment of new Commissioner Eric Maxwell, who will take the oath of office administered by Probate Judge Ann Jackson.
Next comes what could be one of the most important votes of the year — the selection of the board chairman. No one is predicting who will get that job, and none of the commissioners are even hinting at how they will vote. The current chairman is Republican Charles Oddo.
Maxwell has declined to name publicly his choice for the chairman’s slot.
There has been no small amount of controversy regarding the chair in recent years. Republican Steve Brown sat in that spot during 2013 and 2014, then was moved over as Oddo received support from Republican David Barlow and Democrat Pota Coston in 2015.
Charles Rousseau, Coston’s Democrat successor after her death, also voted for Oddo in 2016. Republican Randy Ognio supported Brown in both instances, and Ognio and Brown have been on the same side of several key votes during the past two years, often on the losing end of a 3-2 decision.
The last two years have included a number of outbursts and clashes between Brown and Oddo, although far less frequently in recent months. There have also been numerous public statements by Brown criticizing Oddo’s leadership, and last year’s campaign saw Brown campaigning publicly for the removal of Barlow and Oddo from office. Oddo won re-election but Barlow was defeated by Maxwell.
The only other items on the Jan. 5 agenda involve appointments to the Board of Health and the Planning Commission. John Culbreath and Brian Haren have been recommended for re-appointment to the Planning Commission, which requires a vote of the entire board, and the Board of Health appointment will be made by whoever is selected as the chairman of the BOC.
The reason all of these matters must be addressed a week earlier than usual is that a special called meeting has been scheduled for Jan. 6 at 6 p.m. in the commissioners’ meeting room to discuss the proposed special-purpose local-option sales tax that will be on the March ballot.
This meeting will be conducted jointly with representatives from the county’s five cities, and Oddo suggested several weeks ago that the chairman’s position for the year should be decided before the meeting. The board agreed and voted to amend the meeting schedule in that regard.
The county and the cities have already approved their SPLOST project lists and the Jan. 6 meeting is being convened primarily to fulfill requirements set by state law.
The agenda for the meeting states: “In accordance with OCGA 48-8-111(A), the purpose of the meeting is to discuss possible projects for inclusion in a special local option sales tax referendum being considered for March 21, 2017.”
County officials said the meeting “serves as a state requirement to place a SPLOST on the ballot and must take place at least 30 days before the call for the referendum.”