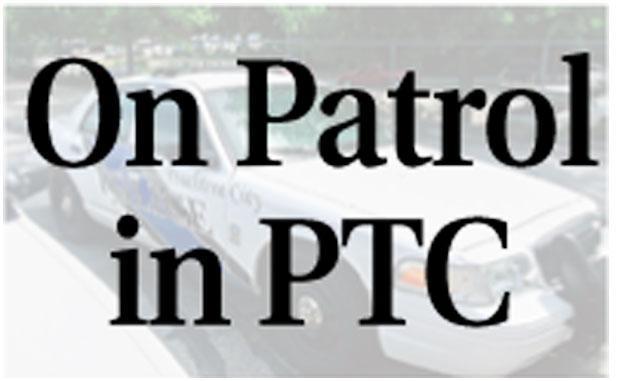 The following general summaries of some daily patrol activities of Peachtree City police officers are taken from recent official reports.
We don’t want no stinking loafing and idleness around here — The call was from a PTC woman, 61, who said she saw a suspicious person around the apartment complex. An investigation ensued and a ticket written. The offender, a PTC woman, 29, “was found to be loitering to the encouragement of loafing and idleness.” She got a summons to city court to explain her idleness.
I don’t remember this being here last night — The PTC man, 42, told the officer he walked out of his home that morning and discovered a sign discarded in his driveway: “Cart path no autos or motor bikes.”The officer checked the area but found no signs missing, so the man filled out an online complaint form to have the city remove the sign.
Looking for the next star of Housewives of PTC? — The woman told police she saw the 54-year-old Brooks man sitting in his van filming women walking in the supermarket parking lot. Officers let him go after determining he had a legitimate reason to be in the parking lot.
The need for speed? — The officer first saw the Dallas, Ga., man, 24, hitting 93 mph in a 55 mph zone on Ga. Highway 74 near Senoia Road, then the speeder was gone. Cops caught up with him on Hwy. 74 South near the police station, this time doing 80 in a 50 zone. He got a slower ride to the Fayette County Jail.
Egg on your face now — At least two guys in a silver Mazda 3 drove by and threw eggs at two parked vehicles, “laughing about what happened.” Police caught them and three teens — two 18-year-olds and one 19-year-old who ought to know better — were arrested on charges of criminal damage to property.
[Events reported above are not necessarily in chronological order of their occurrence.] — Cal Beverly