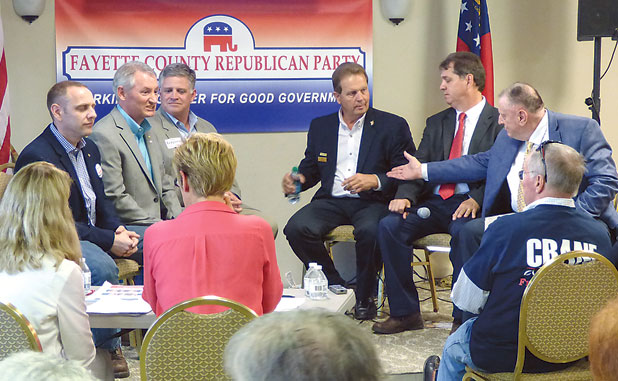 • ANDERS — ‘What you see is what you get’; no political experience but will bring leadership.

• CRANE — ‘Our values are under assault’; we keep sending ‘the wrong people’; ‘the difference lies in what happens when you’re in the crucible, when you’re under pressure, when the question is if you do what the power brokers are telling you to do or you do what your principles, what God, tells you to do, what our community tells you to do.’

• FERGUSON — Led revitalization of town of West Point; will take hard work and ingenuity to D.C.

• FLANEGAN — Washington is broken by special-interest money, ‘a system that basically amounts to bribery, extortion and money-laundering’; ‘I’m the only guy who has pledged to refuse to take the money.’

• MIX — Small-business owner, not a politician; ‘I’m a job creator, I live in the real world.’

Fayette County Republican Party headquarters in Fayetteville was the site of an April 26 forum for candidates for the 3rd U.S. Congressional District seat.

Questions to the candidates, all of whom besides Ferguson and Pace reside in Coweta County, came from moderators and the audience.

The candidates offered opening statements, with many providing the audience with personal and professional background information.

Up next, Crane outlined his view of Washington and gave an assessment of what is wrong with the federal government.

Crane said all the candidates at the forum believe similarly on how the “American Dream” comes true.

“But the difference lies in what happens when you’re in the crucible, when you’re under pressure, when the question is if you do what the power brokers are telling you to do or you do what your principles, what God, tells you to do, what our community tells you to do? For the last five years I’ve been doing just that in the face of the onslaught of government intrusion,” said Crane.

Ferguson followed with his opening remarks. He noted how changes in federal policies caused West Point, where he grew up, to lose its manufacturing base in past years.

“We saw our jobs move overseas. What we were left with was a community that just fell apart,” said Ferguson, explaining the outcome that permeated through numerous aspects of community life.

“When (Ferguson and his wife) moved back (to West Point) we had to make a choice. Do we stay in the community we love and fight for it or do we move somewhere that was more economically viable? We decided to stay and fight … and set about on the task to revitalize the community. (The community) created the environment at the local level to partner with the state to bring Kia to West Point,” said Ferguson. “What’s happened since then has been absolutely remarkable, 15,000 men and women working and moving back into the middle class with a local government that is smaller now than it’s ever been… and rolled back taxes in four of the last eight years.”

Ferguson said he is excited about being able to take the same type of hard work and ingenuity to Washington.

Flanegan followed with his opening remarks.

“Washington is broken,” Flanegan said, noting factors such as special-interest lobbying as a reason. “They’ve set up a system that basically amounts to bribery, extortion and money-laundering. And it’s all completely legal as long as they deposit it in their campaign accounts.”

Flanegan said that, as a freshman congressman, the new representative will be told to make calls on behalf of their party to raise money for their party.

“It’s illegal to do that inside the House office. So Republicans and Democrats conveniently made office space (available) within walking distance so they can walk across the street and go in and make those phone calls,” Flanegan said. “That’s what they do and that’s what we’re up against. As a business man, if somebody gives me $5,000 they expect $5,000 worth of service. That’s the way it works in anything. Do you think business PACs (political action committees) give money because they like your hair? No. They’re expecting votes. The only way we’re going to stop this is if we send people to Washington who refuse to take the money. I’m the only guy who has pledged to refuse to take the money. That’s the only was way to fix this. It’s a money game.”

Flanegan continued his comments, turning them to the world stage with a reference to the Saudis threatening recently to dump their U.S. debt holdings.

“What they are threatening to do is to destroy the currency. Our Congress put us in this situation. Send somebody up there who knows how to get it solved, I do,” Flanegan said.

Mix was next with his opening remarks, telling the audience he is a small business owner, not a politician.

“I’m a job creator,” Mix said of the four businesses he started, all of which are in operation and employing people. “I live in the real world. I’m not a politician. I had no idea three months ago that I’d be doing this. I don’t have political or career aspirations. The House (of Representatives) was originally called ‘the People’s House.’ The concept was that a regular person from the community be chosen by the people and go to Washington, D.C. to represent those people. The part that’s been forgotten is that then they would come back home. I don’t think Washington is broken, I think it’s been hijacked. Career politicians have taken it over. I look forward to taking a real-world experience to Washington, D.C.”

Thomas rounded out the opening comments, also providing aspects of his background, family and his employment with Fulton County schools.

One of the questions to the candidates dealt with the federal debt ceiling, specifically if they would vote to increase that ceiling. Responding with a “yes” or “no” answer, each of the candidates said they would not vote to raise the ceiling.

Candidates were also asked their opinion on federal tax reform and what tax platform they advocate.

Mix responded said he did not know the answer in terms of whether reform should include the Fair Tax or Flat Tax, adding that the District 3 candidates were split on that issue.

“There’s one thing I think we would all agree on, that we certainly need to have a much simpler tax program in place because, as a small businessman I put a tremendous amount of resources and time doing taxes. It’s a huge burden,” said Mix, then citing reports on various types of taxes that put a burden on citizens and businesses.

Thomas followed, saying he would abolish the Internal Revenue Service then institute the Fair Tax or Flat Tax.

“You have to start off getting rid of what’s bad now,” said Thomas. “Then one that we can all agree on.”

In his response, Anders said he prefers the Flat Tax.

“I don’t think anyone likes to pay taxes but somehow we still need money to function and make things work,” he said. “At the end of the day I think you should just pay a flat tax and be done with it. A flat percentage and be done with it. Simplify the tax code down to one sheet.”

Crane in his remarks he is a supporter of the Fair Tax, both at the state and federal level.

“If I was elected to Congress I would be a co-signer of the Fair Tax bill that exists right now at the federal level and then I would work to get the rest of our Georgia delegation, there’s some of them that are not co-signers at this time. (Then) educate the people on why it’s the better idea,” Crane said. “Do you punish income or do you tax based on consumption? I think it’s a more attractive atmosphere for everybody if you tax consumption rather than income. The Fair Tax is the heavier lift, but at the end of the day, I guarantee you it’ll be worth it, and in the meantime we start getting rid of the special interest carve-outs in the tax code that exist to make it a fairer tax for all Americans.”

Ferguson in his remarks said he would be in favor of the Flat Tax.

“I’ve looked at a couple of different options and I think that is the most fair way to go,” said Ferguson. “We all pay the same thing for everything, for a gallon of gas or a loaf of bread. I think we put in a flat tax and eliminate all the deductions and have everybody pay into that. Every single person that earns income in the U.S. has some obligation to contribute to the greater good.”

Last to comment was Flanegan who suports the Fair Tax.

“One of the benefits to the Fair Tax is the underground economy that becomes taxed. People that are making income here, that aren’t reporting their income here whether drug dealers or anyone else, and the Fair Tax is collected,” Flanegan said. “The problem with the tax code right now is embedded taxation. Our local businesses and industries are running with lead shoes on their feet to compete with foreign countries (whose workers) aren’t paying income tax. So they get to shift their goods here without taxation and our goods have built-in taxation. That’s why the Fair Tax is the better tax. The Flat Tax still has the problem of embedded taxation into the products made in this country. That’s why the Fair Tax is the better tax. It’s a one-page sheet.”