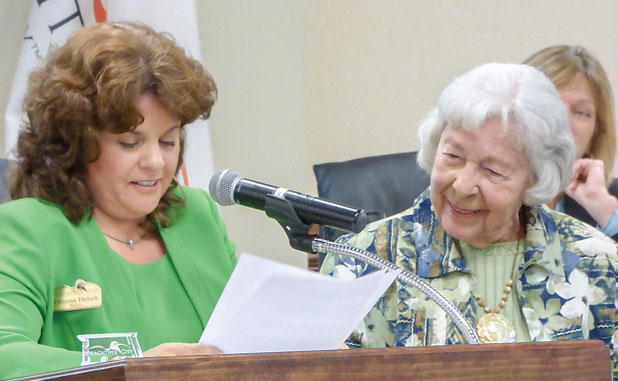 The May 5 meeting of the Peachtree City Council came with a proclamation recognizing long-time resident Dolly Morgan on her 100th birthday.

Morgan was at the podium with Mayor Vanessa Fleisch, who recounted portions of Morgan’s life and her time in Peachtree City. Morgan was all smiles and received applause and well-wishes from the audience.

Morgan was born in Ohio on May 1, 1916, graduated from Ohio State University and later taught school for seven years.

She met her future husband, Howard Morgan, in 1939 and the two were married in 1942. The couple visited Peachtree City in 1970 after Howard retired and began building a house on Pebblestump Point.

Howard got involved in politics and served as mayor for three terms in the 1970s, Fleisch said. He later served as a councilman in the 1980s.

Dolly worked in real estate, volunteered with the recreation department, taught and played tennis, worked at the library for 10 years and was a Welcome Wagon hostess.

A friend took Dolly zip-lining on her 95th birthday and, to this day, Dolly kayaks on Lake Peachtree, said Fleisch.

Howard passed away in 2001. Dolly still lives in the house they built more than 45 years ago.

As the song lyrics say, “Hello, Dolly, It’s so nice to have you back where you belong … You look’n swell, Dolly.”