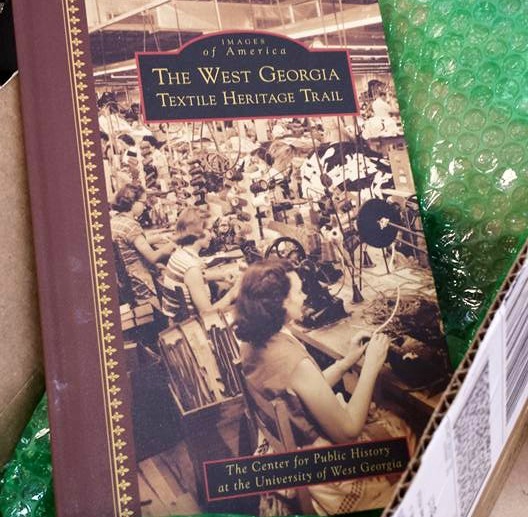 A new book detailing the rise and fall of mills in this area will be featured this Thursday in an event at the McRitchie-Hollis Museum.

Dr. Ann McCleary, director of the Center for Public History at the University of West Georgia, and Keri Adams, assistant director, led the development of a new book by Arcadia Publishing, The West Georgia Textile Heritage Trail. Both will be on hand to answer questions and sign books Thursday at the museum. The book signing is slated for 3-5 p.m.

“We have something for all the mill towns in Newnan, including Moreland, Grantville, Senoia, Arnco and Sargent,” said McCleary.

Adams, a former interpreter at the McRitchie-Hollis Museum, pointed out that even the museum building – which is featured in the book – began as the private residence of local mill president Ellis Peniston. “The stylish exterior and modern conveniences illustrate the profits their families earned from the textile industry,” the book states. Many local homes, and even entire villages, once housed employees of these mills.

In 1950, the Newnan mills employed over 1,000 workers. Over the next two decades, local mills were purchased by national companies: Mount Vernon Mills, then West Point–Pepperell, and Bibb Manufacturing.

“The textile industry powered the economic development of west and northwest Georgia in the 19th and 20th centuries,” the book states. “Several water-powered mills emerged in the antebellum period, but the late 19th century brought more growth as new technology allowed entrepreneurs to build cotton mills in towns and cities. The industry diversified in the 1920s, when hosiery mills moved to the region, and local businessmen established the apparel industry… Although many of the mills and plants have closed, the landscape of this region displays the strong presence of the textile industry.”

Local mills included the Newnan and East Newnan mills, the Moreland and Grantville hosiery mills, the Arnall and Arnco mills, Southern Mills in Senoia, and many others.

Kymberli Darling contributed photographs of the Grantville and Moreland mills for the new book. “The Grantville Hosiery Mill closed in 1980, but its brick shell still survives,” and was even used as a backdrop for the hit AMC “Walking Dead” television series, the book states,  “Now, the old mill is once again a meeting ground for this small, southern Coweta County town,” according to the book.

“In 1920, an old cotton warehouse and fertilizer plant in Moreland, built around 1904, was converted to use as a hosiery mill,” according to the book. “The Moreland Hosiery Company, which produced seamless socks, continued operations here until 1978. The Moreland Museum, which not occupies this space, features some of the original knitting machines.”

Other local mill buildings were converted to loft space and business offices, while mill housing is still used for housing today.

In addition to Darling, Patrick J. Elias, the Newnan-Coweta Historical Society, the Coweta County Genealogical Society, and NCHS Executive Director W. Jeff Bishop also contributed photographs for the new book. The book features photos of local mills, plus many other mills and mill villages from the West Georgia area. The book also features photos of the “Uprising of 1934.”

A cotton sales receipt from Grantville Mills shows a Sept., 1943 sale of $209 worth of cotton. An 1890s cotton gin from Grantville is also pictured, as well as a cotton warehouse in Turin from the same time period. The book also features a 1942 paycheck from Grantville Hosiery Mills and a photo of an African-American mill employee at Arnall Mills in 1960.

Several photos from the General Textile Strike of 1934, which resulted in the National Guard being sent to Newnan to round up strikers, are also featured in the book.

The Newnan-Coweta Historical Society is a member of the West Georgia Textile Heritage Trail, and the McRitchie-Hollis Museum and Male Academy Museum are featured sites on the trail, which extends across west and northwest Georgia. The current exhibit at the Male Academy, “Labor of Love,” features the mill family of Ina Thornton Yates, who lived and worked at Arnco, and the quilts she made for her family members while she lived there.

“The Center staff are beyond excited to have our beautiful The West Georgia Textile Heritage Trail” guidebook through Arcadia Publishing!” said Adams.

“This was a collaborative effort of University of West Georgia Department of faculty and students and UWG Department of Art Photography students,” she said.

“We’re very proud to be featured in the book and on the Trail, and also to host these authors for this special event,” said Bishop. “We hope everyone will come out and meet them and learn more about this big piece of our local history.”