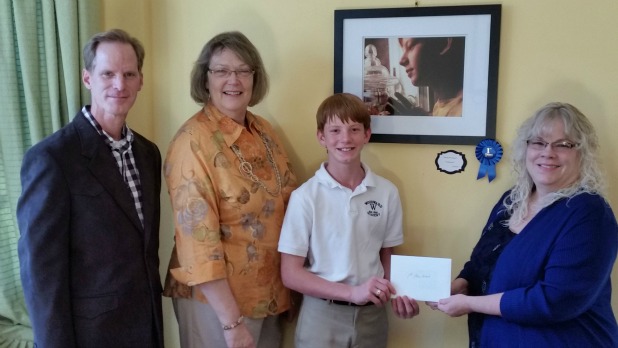 At the opening reception for the 7th Simple Pleasures Photography Competition held Nov. 7 at the McRitchie-Hollis Museum, a seventh-grade Newnan resident was named the first prize winner of the competition.

The son of Drs. Darin and Kelley Brummett, Sam Brummett is a student at Woodward Academy. His teacher, Janie Finch, had just received his completed assignment for her photography class and decided to submit images from that project to Simple Pleasures. The class assignment was a group of self-portraits with an emphasis on lighting.

Brummett’s winning work, entitled “Glimmer,” features a boy with a longing look at a jar full of cookies.

Judge Kathryn Kolb noted, “A photograph should never have to be explained.” She awarded prizes based on the feeling of simple pleasures conveyed through images.

The 35 photos which merited the wall include professional and amateur photographers, a number of whom regularly enter photography competitions. This was Sam’s first.

His question on receiving his prize was how he could give back toward the charities (Newnan Coweta Historical Society and the Paul Conlan Memorial Scholarship Fund administered by The Coweta Foundation) which benefit from the competition. Normally, 35 percent of the proceeds from the sale of photography in the current exhibit go toward the charities. Sam noted that his desire was to give 100 percent of the $200 proceeds received from the sale of his work to charity.

Online voting for the People’s Choice Award is ongoing through Nov. 20 at www.simplepleasuresfoto.com.

Fine Lines Art & Framing and New Tech Photo sponsor the People’s Choice Award for which the winner will be announced Saturday, Nov. 21.