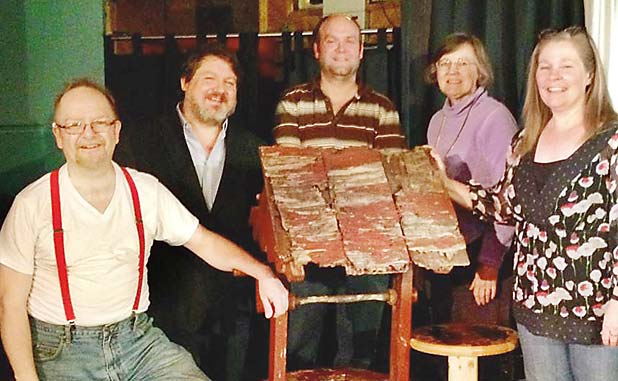 “Flies at the Well,” the exciting new musical re-interpretation of the famous 1948 John Wallace murder trial, had its first staging outside of Newnan last week, April 17-19, at The Fourth Wall, a theater just outside of Detroit, Michigan.

“We wanted to see how an audience totally unfamiliar with the story, and not even from the South, would react to the play,” said Caroline Abbey, Newnan Theatre Company Board member and chairperson of the “Flies at the Well” play committee.

“I am happy to report that they loved it,” she said. “We are moving forward and looking forward to staging the play, hopefully in the Coweta County Courthouse, in the spring of 2016.”

The play tells the story of John Wallace, a wealthy landowner who ran a farm and moonshine business in Meriwether County during the 1940s. He was apprehended by Sheriff Lamar Potts for murdering one of his tenant farmers in Moreland. The incident was made into a book, “Murder in Coweta County,” during the 1970s, and later into a television movie starring Andy Griffith as Wallace and Johnny Cash as Potts.

The new play is based on the same series of events, but is a new interpretation that includes musical elements, most notably “Sacred Harp” or “shape note” music written.in the 19th century in Newnan.

The final touches are being put on a new re-write by the playwright, W. Jeff Bishop, a public historian and former writer for the Newnan Times-Herald newspaper.

“It has been an honor to work on this project, and I can’t wait to share it with the community,” said Bishop. “We’ve been working hard to get it just right.”

Audience members have filled out surveys for each of the three readings that have been done so far. “The reactions have been overwhelmingly positive,” Bishop said. “But that doesn’t mean there isn’t still work to do, to make it even better”

Newnan Theatre Company hopes to make the new play an annual event at the county courthouse.

“We’ve been working on this for a number of years, and it’s so exciting to be approaching these final stages,” said Abbey.

The play, as staged in Jackson, Mi., included director Gary Minix and other Detroit-area actors. They were all “wildly enthusiastic,” according to Jennifer Dorrell, who will direct the show when it premieres next year.

“This is going to be a lot of work, so we’re beginning now,” said Dorrell. “We want this to be a special, one-of-a-kind community event.”

For more information or to support this endeavor, contact Caroline Abbey at ctabbey@charter.net or Newnan Theatre by calling 770-683-6282.