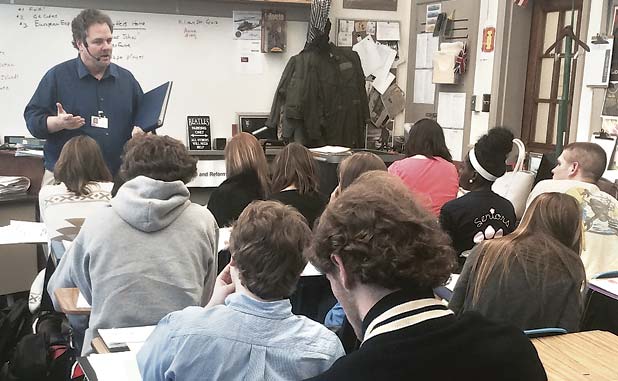 The 50th anniversary of the Vietnam War was celebrated on March 10 with activities at Newnan High School that included classroom lessons and an evening commemoration ceremony by a decorated Vietnam veteran. A fly-in of Vietnam-era helicopters is set for March 18.

“Newnan High School is the only high school in Georgia involved with the U.S. Department of Defense in this year’s 50th anniversary celebrations,” said Steve Quesinberry, NHS history teacher and Chair for the school’s History and Social Studies Department.

Newnan High School’s History and Social Studies Department organized the activities in partnership with the U.S. Department of Defense. Vietnam veteran Colonel Paul Longgrear, U.S. Army (retired), spoke at the ceremony which included Vietnam-era military equipment and historical exhibits. A former Green Beret and a recipient of the Silver Star, Longgrear served two combat tours in Vietnam during his 26-year military career and relayed stories of his service during the ceremony.

Longgrear is a Christian minister and missionary who lives in Georgia, is a member of the Ranger Hall of Fame, the Arkansas Military Hall of Fame and is currently in charge of the Georgia Military Veterans Hall of Fame.

During Vietnam, Colonel Longgrear was in a special forces camp that was attacked by tanks – an unusual circumstance during the Vietnam conflict, said Quesinberry.

“His camp was attacked by about 15 Russian tanks manned by North Vietnamese crews, and the story about how he survived is incredible,” Quisenberry said.

As part of the extended activities, Huey and Cobra helicopters will be flown in to Newnan High School’s Drake Stadium on March 18.

The helicopters, both of which were actively piloted in Vietnam during the war, are being flown from Tara Field in Hampton by army aviation enthusiasts.

The helicopter landings are not open to the general public, although local veterans and others can contact Quesinberry for possible viewing.

The official commemoration of the 50th anniversary of the Vietnam War began last year, said Quesinberry.

“You can pick the year that you want to say that it started, but 1964 was the big event – the Gulf of Tonkin Resolution – that is actually going to pave the way for us to jump in, in 1965,” he said.

Newnan High School’s commemoration ceremony and related events are being conducted in cooperation with the U.S. Department of Defense, as part of their 50th anniversary activities.

“Newnan High school is the only high school in Georgia directly partnering with DOD to commemorate the 50th anniversary of the Vietnam War,” said Quesinberry.