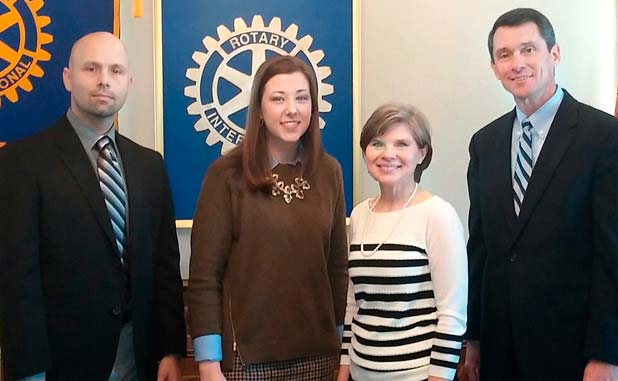 The Newnan Rotary Club serves as the local sponsor for the statewide STAR program, which recognizes top-achieving high school students each year.

This year’s STAR Students and Teachers from Coweta County’s five participating schools were:

To be named STAR, senior class students must have the highest score in their school in one sitting on the Scholastic Assessment Test (SAT) taken through the November test date of their senior year. They must also be in the top 10 percent or top 10 students of their class based on grade point average.

STAR students are asked to honor the educator who most influenced their academic achievement by naming them as their STAR Teacher. All five STAR teachers introduced the Rotary members to their students at Friday’s program, citing their scholarship, high character, and their extracurricular and civic accomplishments.

As a student, Gordon described Chapman as well-balanced, focused, highly analytical and “flawless… she does not make mistakes.”

Jackson said Chapman is also a member of the National Honor Society, a National Merit finalist and this year’s Newnan High School Valedictorian.

“She is also a very nice person” who goes to extra lengths to help fellow students in her classes, said Gordon. Chapman plans to attend the University of Alabama this fall and double-major in Speech Therapy and Spanish.

The county STAR Student honoree is also chosen based on SAT ranking. As Coweta’s 2015 STAR student, Chapman will represent Coweta County as a nominee for regional STAR Student on March 27.

The STAR Program is sponsored state-wide by the Professional Association of Georgia Educators, Georgia Chamber of Commerce and Georgia Department of Education. The Newnan Rotary Club hosted the local STAR program locally for the ninth year. The Newnan Rotary luncheon was also attended by the STAR Students’ families, school principals or heads of school, and counselors from each of the represented high schools, as well as Coweta County Board of Education members and Superintendent Steve Barker.