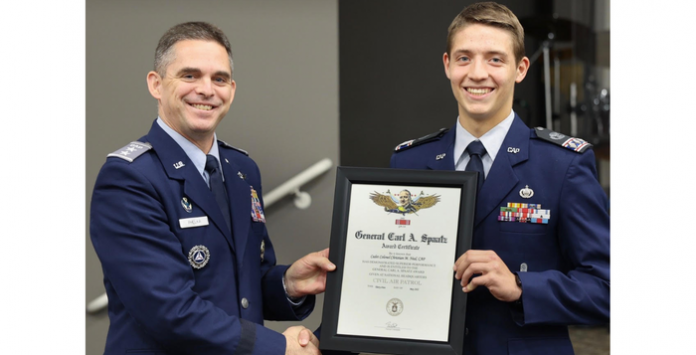 Cadets qualify for this prestigious award after devoting an average of five years to progress through sixteen achievements in the CAP Cadet Program that include: aerospace education, character development, leadership and physical fitness. Along the way they develop self-discipline, a strong sense of personal responsibility, the ability to lead and persuade, and the foundation necessary for pursuing a career in aviation, space, or technology.

Cadet Col. Neal served as the squadron’s cadet commander and continues to serve as the Georgia Wing Representative to Southeast Region Cadet Advisory Council and is currently pursuing a career in aerospace.

Currently, GA-116 meets every Thursday at 6:30 p.m. at  592 Bernhard Road, Fayetteville, GA 30215. Ages 12 and up are welcome to join. Find out more about GA-116 at PeachtreeCity.cap.gov  or find us on Facebook- Peachtree City Falcon Field Composite Squadron GA-116, Civil Air Patrol.

Established in 1941, Civil Air Patrol is the official auxiliary of the U.S. Air Force and as such is a member of its Total Force. In its auxiliary role, CAP operates a fleet of 555 single-engine aircraft and 2,250 small Unmanned Aircraft Systems (sUAS) and performs about 90% of all search and rescue operations within the contiguous United States as tasked by the Air Force Rescue Coordination Center. Often using innovative cellphone forensics and radar analysis software, CAP was credited by the AFRCC with saving 108 lives last year. CAP’s 58,000 members also perform homeland security, disaster relief and drug interdiction missions at the request of federal, state and local agencies. As a nonprofit organization, CAP plays a leading role in aerospace education using national academic standards-based STEM (science, technology, engineering and math) education resources. Members also serve as mentors to over 24,000 young people participating in CAP’s Cadet Programs.