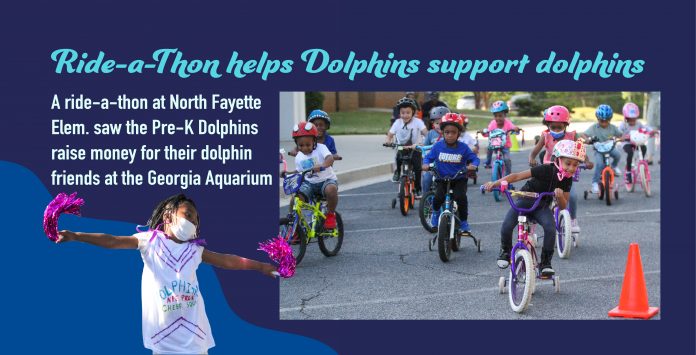 Wheels were rolling for a good cause at North Fayette Elementary with a Ride-a-Thon that saw the Pre-K Dolphins raise money for their dolphin friends at the Georgia Aquarium.

The service learning project centered around raising money for the Georgia Aquarium “Name Your Own Dolphin Seat” fundraiser. In addition to having a seat within the aquarium’s Dolphin Theater honoring the NFES Dolphins, the funds go towards education programs at the aquarium, including field trips for Title 1 schools.

Students pledged to ride in the “Ride-a-Trike-or-a-Bike-a-Thon” for at least 30 minutes if family and friends donated, and other students supported them as the “Pre-K Cheer Squad.” They raised more than $370, and the total will grow because Principal Dr. Lisa Moore is letting teachers donate $3 for a jeans day.

Not only did they work on raising funds, they also made flyers and posters and studied dolphins. After they rested up from all the riding, they shared what they had learned in a Zoom presentation with aquarium employees.

“My goal for the children was for them to participate in giving toward a cause, and, in this case, it was education at the aquarium,” said Pre-K teacher Clara Rogers. “I wanted them to learn how to advocate for a cause by speaking about what we were doing as a class family as they were fundraising.”