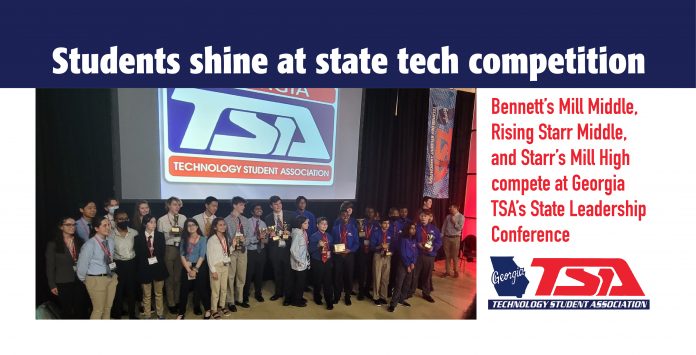 The Georgia Technology Student Association’s State Leadership Conference brought together over 2,000 middle and high school students for a bit of fierce and friendly competition. Three local schools, Bennett’s Mill Middle, Rising Starr Middle, and Starr’s Mill High, were among the big winners in a variety of disciplines.

Bennett’s Mill Middle showed again they are Bronco Strong, finishing as state finalists in nearly every category they attempted.

As a team, the Broncos placed 8th in Outstanding Chapter.

Every Rising Starr student that attended was a top 10 finisher.

The competition was extra special for one RSMS student, as Liam Bell was elected as the Georgia Technology Student Association 2nd Vice President. Liam will serve as a state officer from now until next year’s State Leadership Conference, representing all middle school TSA chapters in the state of Georgia.

Starr’s Mill sent a team to compete in the high school division, placing in three areas.