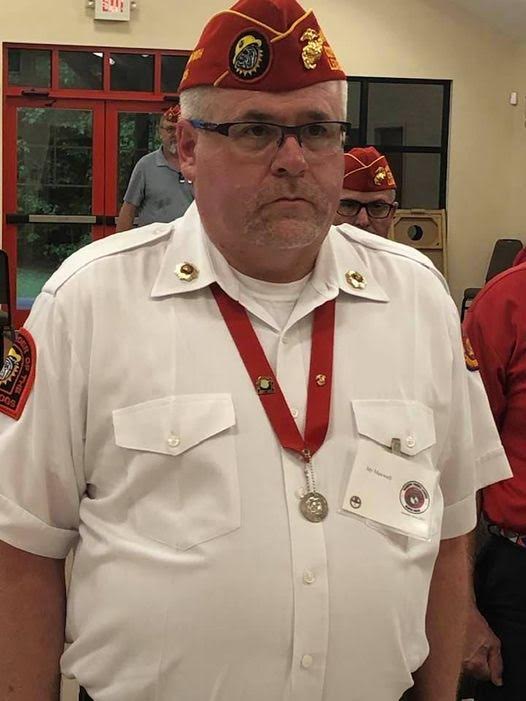 Jay Maxwell has been elected and installed at the new Commandant of the Sgt Clyde Thomason Medal of Honor Detachment of the Marine Corps League. Maxwell graduated from Jonesboro High School in 1983 and from Griffin Technical School in 1985 before enlisting in the United States Marine Corps in 1987. After graduating from Boot Camp at Parris Island, SC, he reported to his Military Occupational Specialty School at Redstone Arsenal for training as an Ammunition Technician.

Maxwell then reported to Detachment One, Ammunition Company, Rome, Georgia Reserve Center. He served there from 1987 to 1991. He was promoted to Sergeant in October 1990 and was called to active duty the next month where he saw service in both Desert Shield and Desert Storm. He returned home in June 1991 and his active service as a Marine ended with an Honorable Discharge.

In 2014, Maxwell joined the Marine Corps League Detachment which serves Fayette and Coweta counties. Over the years, he served as a Squad Leader, Sergeant-at-Arms, Adjutant, and Eagle Scout/God Awards Coordinator.  Since joining the Marine Corps League, Maxwell has been elected to serve as Judge Advocate, Junior Vice Commandant, Senior Vice Commandant, and, now, as Commandant. He has been awarded a number of ribbons for his service in the League and to the community.

Maxwell has also seen service as a member of the Color Guard, is a Life Member of the Marine Corps League, and has regularly participated in the Toys for Tots programs which distributes toys to 5,000-6,000 children locally, has been active in the Flag Giveaway fundraisers which raises thousands of dollars each year for veteran related causes, and participates in the Fallen Marine Program. In 2016, he was inducted into the Military Order of the Devil Dogs, the honor society of the Marine Corps League.

Maxwell is also a member of Post 2667 of the Veterans of Foreign Wars in Newnan, GA, where he participates in Poppy Drive Fundraisers, the Last Salute for Veterans, and he serves on funeral details. He has served as a Board Member of the Coweta Veterans Club since 2020.

Maxwell and his wife Lori were married in 1990 and have two sons, Matt and Brandon. The family moved to Coweta County in 2004 and has lived in both Senoia and Newnan. In 2018, Maxwell retired with 29 years service from Clayton County Water Authority.

The Sgt Clyde Thomason Medal of Honor Detachment is one of 1,100 detachments in all 50 states composed of Marine veterans, FMF Corpsmen and Chaplains, and Marines who continue to serve the community and the Marine Corps. The Marine Corps League, chartered by an act of Congress, offers funeral honors support, color guards, support for transitioning Marines and family support, rifle and pistol matches, college scholarships, and much more.

The local detachment serving Coweta and Fayette counties has, for several years, provided Christmas toys to 5,000 – 6,000 local children through its Toys for Tots program. The detachment also has supported the Wounded Warrior Regiment, those suffering with traumatic brain injuries, Healing for Heroes, and the East Coweta High School Marine Corps JROTC, to name a few.

Membership is open to all honorably discharged Marines and Fleet Marine Force Chaplains and Corpsmen. A valid DD-214 is required. The local detachment meets each second Tuesday of the month in the fellowship hall of Christ the King Church, 3881 Highway 34 East, Sharpsburg. A website if available at http://MCL1325.net/. There is also a Facebook page at Sgt. Clyde Thomason, MOH Marine Corps League Detachment #1325.