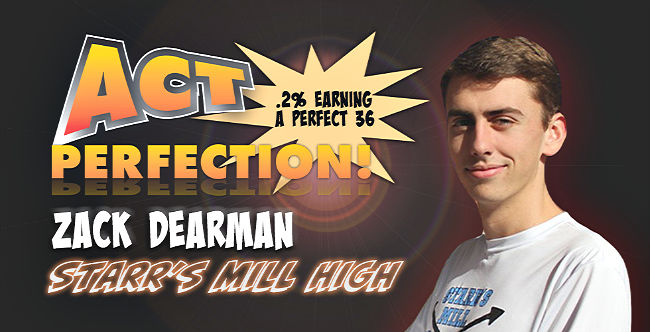 A senior in the 2020 graduating class at Starr’s Mill High has achieved what few students in the United States have or ever will, a perfect score on the ACT.

Zack Dearman is among the two-tenths of one percent of students who earn the top score of 36 each year. There were over 1.8 million people who took the ACT test in 2019, according to ACT officials. The average composite score for the test was 20.7, roughly 15 points less than Zack’s score.

The ACT consists of tests in English, mathematics, reading, and science, each scored on a scale of 1-36. A student’s composite score is the average of the four test scores. The score for ACT’s optional writing test is reported separately and is not included within the ACT composite score.

The ACT is a curriculum-based achievement exam that measures what students have learned in school. Students who earn a 36 composite score have likely mastered all of the skills and knowledge they will need to succeed in first-year college courses in the core subject areas.

ACT scores are accepted by all major four-year colleges and universities across the United States.