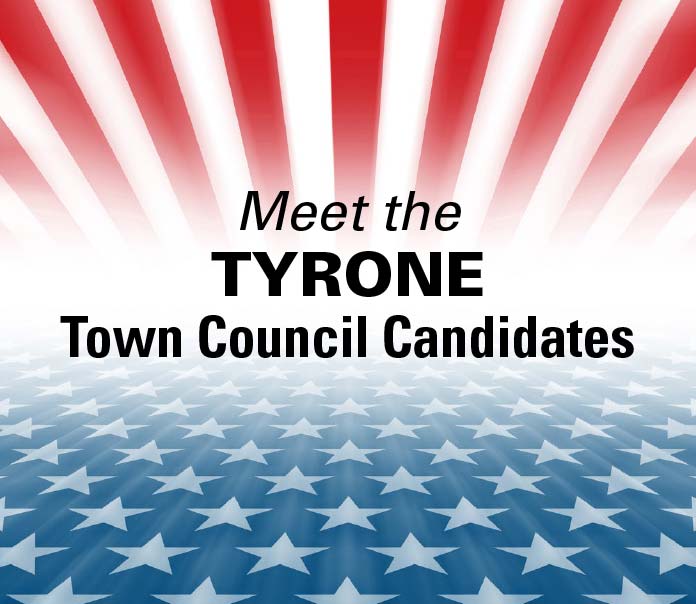 1. Introduce yourself to our readers: Who are you, how old are you, what is your current job, what kinds of jobs have you done, how long have you been in Tyrone and why are you running for public office this year?

I’m currently employed as a “full-time/part-time driver” for “Caring Man In A Van.” We provide a service for ambulatory, wheelchair and stretcher clients whom require non-emergency medical and personal transportation. I explain to folks that this is truly a ministry and I’m able to talk about Jesus and pray over most of my clients.

I am an Army Vietnam veteran having served 1966-1969. I participated in the TET Offensive January 1968. I was owner of Certified Video Services, LLC in Jackson, Mississippi where I provided audio/visual services for local attorneys.

Shortly after moving to Georgia I became active in local county business and was elected Fayette County Commissioner in 2012. During my term in office, I learned that Fayette Senior Services was in need of drivers. After my term in office, I drove for them for a year and I met Scott Chamberlain of “Caring Man In A Van.” After visiting with Scott I made the decision to join his company and continue meeting the transportation needs of our senior citizens. Instead of only providing the service for Fayette County citizens, I now provided transportation throughout greater Atlanta.

My precious bride Cherie and I moved to Tyrone November 2010 and thoroughly love our neighbors and our great town. We know God led us here and we give Him thanks on a daily basis. I know if I am elected I will bring the same community service spirit I brought to Fayette County. Literally, on a daily basis, I am reminded of the good I did for Fayette County and recently was approached to run again for that office. My wife and I feel God led me to run for Tyrone Town Council.

LINDA HOWARD (incumbent) — My name is Linda Howard. My family moved to Tyrone from Cartersville because my dad took a job at the rock quarry when it opened in 1948. I was 2 years old.

I went to Tyrone Elementary School and graduated from Fayette County High School in 1964. That same year Billy Howard and I married. We celebrated our 55th anniversary this year.

After Billy served in Vietnam with the First Infantry Division, he came back to work at Ford Motor Company. We settled back into a normal life and had two children, LeAnn and Mitch. Mitch and his wife, Christen, now have two sons, Logan and Konor, and live in Tyrone. LeAnn has made Florida her home for the last 9 years.

It seems I have always been drawn to jobs where numbers were involved, from banking, bookkeeping, financial secretary and income tax preparer. It was an honor to work at The Fayette State Bank in the late 1960s and ‘70s. Mr. Floy Farr, Charlotte Griggs, Margaret Boyd and others helped shape my talents and abilities.

Mr. J.C. Hanchey was Tyrone’s mayor in 1969 and also a deacon in our local Baptist Church. He asked me to be the Town Clerk. While learning about the position, I discovered the Town Charter stated that the Town Clerk position should be filled by an elected council member. That’s when my political career began.

I was elected the next year to the Town Council, becoming the youngest and the first female to serve. During the ‘70s Tyrone bloomed through extending our town limits, the addition of our police department, volunteer fire department, an actual Town Hall and our first Founders Day, just to provide a few examples.

I served until 1978, at which time my young family needed more of my attention. That is also when I started my business, Tyrone Income Tax Service.

So for the next 30 years I focused on my family, my business and working part-time at First Baptist Church Tyrone. We, as a family, were involved in all areas of the church. Billy was ordained as a deacon, worked in the boys’ department and served on the building and grounds committee. Through the years, I was blessed to have taught all age groups and served on many committees.

I also worked with the Rareover voting district as poll manager for over 25 of those years. Being active with PTO, school classroom involvement, Boy Scouts, ball games, VBS, cheerleading, chaperoning youth trips, homecoming, Fairburn Baptist Association treasurer, and other mom and wife duties kept me busy.

In 2011 Tyrone celebrated her 100th year! I chaired the committee to help the citizens become aware of it through various events and celebrations. One of the most enduring ways was through a book. Citizens, past and present, were asked to submit pictures and family history.

It was an honor to receive that information and then compile and write articles about the businesses, churches, schools, founding families, Founders Day and the town government. The finished product is a 328-page, hard bound, color book which includes historical information not written anywhere else. The Tyrone Centennial Book was well received and will be cherished for a long time to come.

After working closely with the mayor and council during that year, my passion and concern for the town I have called home all of my life was rekindled. I ran for Town Council Post 1 in November 2011 and was elected. Then 4 years later, I was unopposed. And now this year, I am proudly campaigning again hoping to be able to work for Tyrone citizens for another four years.

It’s true that much has been accomplished, and the future truly looks great. Because of that, I want to continue to be a part of the team working to protect our past and present while we invest in the future of Tyrone.

2. How many Town Council meetings have you attended or viewed?

BARLOW — Just as I did as county commissioner, I will solicit citizen input to meetings. We need to hear from our folks. One well established business owner said, “Why bother with attending meetings. Nothing changes regardless of what I say.” He was excited with the prospect of me being elected.

HOWARD — The infrastructure of any town must be maintained. The resurfacing of our roads and the expansion of our golf cart paths are prioritized by conditions and use. We have employees who are trained and up to date with changing laws and restrictions. They do their jobs well, and it shows. Just take a look at Tyrone!

4. What two other issues in Tyrone concern you the most? Please be specific about how you would approach those issues.

BARLOW — [No response provided by the candidate.]

HOWARD — Some of the issues many other towns/cities face are not problems for Tyrone. We were recently acknowledged as the 4th safest city in Georgia. Our citizens, businesses, Police Department and town employees work diligently to maintain that level of security.

The government of Tyrone works well with Fayette County and Georgia departments on projects and share information beneficial to each other. With the same leadership in place, Tyrone will continue to have responsible and smart growth through permits and zoning.

The Downtown Center rezoning is a great example of that. It will release land previously restricted by setbacks, which will greatly benefit downtown property owners and allow them to use more of their land.

Downtown is also going to be enhanced by the new Municipal Complex which will be constructed over the next year. The expansion of the sewer system to the downtown businesses will strengthen the economy. The mayor and council consciously choose to protect and promote our downtown district, just as we do every area in our town.

5. What is your vision for the future of Tyrone?

BARLOW — My primary vision for Town Council is to become more active in local and county politics; particular with bridging Tyrone with Fayette County. Tyrone is the “gateway” to Fayette County and our leaders should be actively engaged in coupling the town and county’s future as deemed appropriate. I bring that kind of future.

To quote Dr. Barry Marchman, “We need more leaders in public office who are bold enough to tell the truth and push back the destructive waves of progressivism that threaten our country and our community”.

HOWARD — Knowing my grandchildren also call Tyrone home makes my mission and determination more resolved: promote and protect Tyrone’s values and secure that for all people. I want our citizens to love and be proud to call Tyrone home, as I have always been.