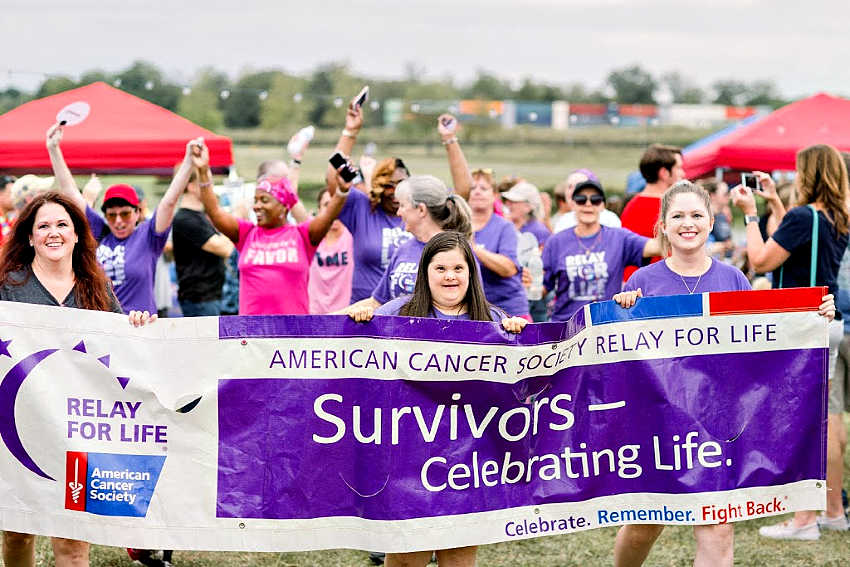 In a remarkable turnaround from declining participation in recent years, Fayette County surpassed all fundraising goals for the 2019 Relay Season, raising $71,000 in excess of its goal and welcoming 2,000 people to its signature event held on August 23. Additionally, at least 130 cancer survivors were in attendance and every school in the Fayette County School System registered to help with fundraising.
Hosted at Pinewood Forest, this year’s Fayette County Relay for Life raised more than $170,000 to fund groundbreaking research and provide free services for cancer patients through the American Cancer Society. A part of Fayette County since 1996, the American Cancer Society Relay for Life is an annual volunteer-led fundraiser that has been a staple in the community.
“The American Cancer Society is profoundly grateful to the people of Fayette County for their stalwart support, which allows us to continue to fund breakthrough cancer research and save lives,” said Tanya Fairbanks, an American Cancer Society staff member who oversees activity in south metro Atlanta. “From the new location at Pinewood Forest to the outdoor movie beside the lake, the record participation, and the abundance of activities offered, this year’s Relay For Life in Fayette was nothing short of incredible.”

“We are speechless at the outpouring of support from our community for those who have been affected by cancer. Relay For Life is an event that weaves our community together with one common thread – the desire to end cancer, and we couldn’t be more proud of this year’s event,” event co-chairs Abby Bradley and Jennifer Walker said in a statement.

Bradley and Walker, who are both on staff at Pinewood Atlanta Studios, are not new to the fight against cancer, though this was their first year chairing a Relay For Life event. Both were raised in Fayette County and have been touched by the disease personally. This year, they were instrumental in transforming the event as they led a team of community volunteers and rallied their colleagues to raise funds one dollar at a time. Pinewood Forest and Pinewood Atlanta Studios were the top teams of 2019, raising a combined $29,698. Debbie Arett was the top participant, raising $7,093, and the top faith team was Fayette Presbyterian Church, which raised $6,008.
Themed “Lights! Camera! Cure!” to showcase its location across from the famed studio, this year’s event turned into a full production, drawing companies, schools, churches, volunteers from every corner of Fayette County (and even from across Metro Atlanta!) for honorary ceremonies, performances, games, raffles and a first for Fayette’s Relay For Life: a Disney movie on the lawn.
Pinewood Atlanta Studios also offered an exclusive behind-the-scenes studio tour to encourage competition between the schools, which raised $29,000 in total. The grand prize went to Spring Hill Elementary School in Fayetteville, which raised $5,796.
Not only did every school have a registered team, but several schools were represented in live performances. These included guitarists and the orchestra from Whitewater Middle School, chorus students from Booth Middle School, and the Sandy Creek High School orchestra and drumline.
But it didn’t stop there. Eight food vendors and 29 sponsors joined this year’s event, thrilled with the location and the numerous activities available. Elected officials from throughout the county were also in attendance, including State Representatives Josh Bonner and Derrick Jackson, County Commissioner Randy Ognio, Fayetteville Mayor Ed Johnson, Fayetteville City Council Members Scott Stacy and Paul Oddo, Peachtree City Council Member Phil Prebor, Fayetteville Chief of Police Scott Gray, Peachtree City Chief of Police Janet Moon and Tyrone Chief of Police Randy Mundy.
With over 2,000 people in attendance, survivors, caregivers, patients, friends and family members showed cancer just how strong this community is when it stands together.
This year’s Presenting Sponsor was Piedmont Fayette and the Platinum Sponsor was Northside Hospital Cancer Institute. To learn more about Relay For Life or recent advances to cancer research funded by the American Cancer Society, visit RelayForLife.org.