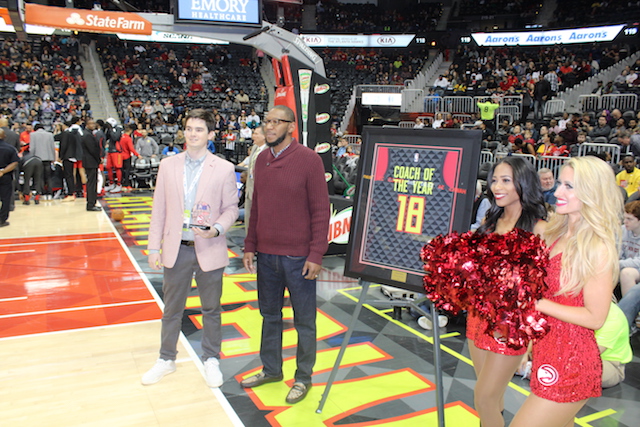 He was recognized in pre-game ceremonies March 11 before the Atlanta Hawks game against the Chicago Bulls at Philips Arena.

Mitchell and his wife Ketrina own and operate I Beat A.L.L. Inc. in Tyrone. He was nominated anonymously by a parent of one of the players in that program, then chosen from a number of applicants.

Here is a portion of what was written about Mitchell by the person who nominated him:

“Coach Mitchell’s teams have proven themselves off and on the court. He gets every team to leave it all on the court and has won several championships with fall, winter, and summer league. It’s so much more than basketball in Coach Mitchell’s perspective, he believes in scholar athletes not just basketball players.

“Coach Mitchell is the epitome of strength. These teams have seen Coach come into the facility at his weakest. He has coach them when he has been weak from chemo and other necessities to help manage his rare cancer. He shows these boys how to never give up, believe in themselves, and takes no excuses. He shows them that basketball is a game and it is character that makes them.”

Mitchell was diagnosed in 2008 acute lymphocytic leukemia (A.L.L.). He later went into remission but had a relapse in 2016 for which he is now being treated. He and his wife started their nonprofit organization in 2009 to help local youth. He started his coaching career at Landmark Christian School and moved on to Whitewater Middle School as a teacher and coach.

The top three finalists for Jr. NBA Coach of the Year will be selected from the pool of NBA and WNBA winners across the country. Each of the three will receive a $2,500 grant to support his or her organization as well as an all-expense-paid trip to Chicago for the Jr. NBA Leadership Conference where the national winner will be announced. The national winner will receive an additional $2,500 grant.

For more information on what Mitchell’s organization is doing locally, visit ibeatall.org.