Spring Hill Elementary was evacuated by law enforcement on March 6 as a precautionary measure after an unknown man was seen in the school after classes had ended. Later contacted by police, it appears that the man was there on business related to tutoring, and was not there for inappropriate reasons. He was issued a warning not the return to the school.

Fayetteville Police Department spokesman Chad Myers on March 9 said investigators initially spoke with the man by telephone and it appears, at this point, that he had a legitimate business-related purpose for being at the school and was not there to engage in anything inappropriate. Myers noted that the man would have been better served by going to the school system office first.

Myers said the events of the afternoon began at the former Fayette Middle School, now the site of the alternative school, on Grady Avenue when a man described as a black male wearing a name badge tried to enter the school.

Staff would not let him in the school and, when attempting to close the door after his request to come in, the man reportedly put his foot in the door, Myers said, adding that staff said they slammed the door on him.

Spring Hill staff was notified when the man exited the parking lot and drove down the access road that leads to the nearby Spring Hill Elementary School.

Classes had ended at Spring Hill and the buses had already left the school to take children home, Myers said.

Myers said the man said he entered the Spring Hill building at 2:58 p.m. after being buzzed-in and was picked up on school video as he entered the school. The man was asked by a staff member why he was there, and he subsequently produced an ID, said Myers. The man worked his way to the school office, and was told he would need to go to the school system office to inquire about his tutoring business.

Myers said the man was able to be seen on camera during part of the time he was in the school. Myers noted that the man soon said he needed to use the restroom. Meantime, the man left the school prior to officers arriving. Without knowing if he was still inside, the decision was made to evacuate the school and have it cleared by officers, Myers said.

The few remaining children, along with staff, were evacuated out of an abundance of caution as Fayetteville police and Fayette County deputies arrived at the scene, Myers noted, adding that the man was not found and school was cleared at 4:35 p.m.

Myers said no one was injured in the evacuation.

Myers reported that someone matching the man’s description arrived at the the school system’s central office building on Stonewall Avenue Monday afternoon inquiring about becoming a vendor for the school system.

The trip to central office came after the man inquired where the school system might be, and was directed there one of the staff at Spring Hill.

The man left Spring Hill to go to the school system office before officers arrived.

The man, at the request of the school system, was issued a criminal trespass warning, said Myers, adding that no criminal charge was made.

Contrary to some social media postings, Myers reiterated that there was no gun observed in connection with the man who entered the Spring Hill building.

Meanwhile, in another school intrusion incident, a man was detained outside Sandy Creek High School last week,  warned, then released. 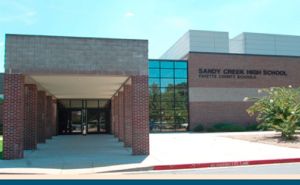 A 19-year-old man from Fairburn was seen by Sandy Creek High School staff outside the school during the week of March 5. While his purpose for being at the school was unknown, school staff intervened when the man was spotted outside the school, and subsequently detained him. He will be issued a warning that he will be arrested if he returns to the school.

“He was not a threat, so we didn’t put the school on lockdown,” said School System Director of Special Projects Sam Sweat.

Sweat said the incident occurred during lunch time on the week of March 5, when a coach saw a male outside the school with a backpack. The coach approached the male and asked what he was doing, said Sweat. The male responded that he was going to his car. Sweat said the coach detained the man because students do not go to their cars during school hours.

The male, a 19-year-old from Fairburn, was brought into the school for questioning, Sweat said.

While being questioned, the man said he needed to go to English class, which school officials knew was not the case since English classes are not held during that time of the day.

The Fairburn man was turned over to the school resource officer (SRO) and his driver’s license was confiscated, said Sweat. The SRO called Creekside High School in south Fulton County where the man would presumably be attending, with Creekside saying he was not registered there.

The male will be receiving a trespassing letter stating that if he returns to the school he will be arrested, Sweat said.