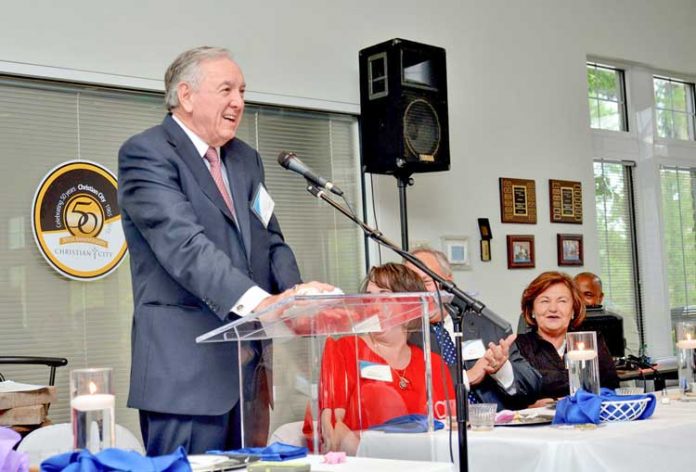 For 22 years, Bob Crutchfield led the efforts and the mission of Christian City. Crutchfield passed away on Sept. 20, leaving a legacy of compassion and service to others.

The legacy we leave is the legacy we live. And for Bob Crutchfield, that legacy began in 1993 when he became president and CEO of Christian City.

“He was a truly honorable man,” said Carl Ryden, Chaplain and Chief Spiritual Care Officer at Christian City. “Bob came to Christian City as one who felt called of God to serve in ministry, dedicating himself tirelessly to what he deemed a most important work for the kingdom.”

In 2015, Crutchfield informed Christian City’s Board of Trustees, financial supporters, friends and residents of his ALS diagnosis, announcing that he would be retiring due to his declining health, and announcing that the search was underway for a new CEO to take over leadership of Christian City.

It was on that occasion that Crutchfield said, “Just as the Lord has done for more than 50 years, since the start of the Christian City Home for Children in 1965, I rest assured that He will continue His faithful service to Christian City into the future. He works through loving people like you who have supported us through your prayers, time, talent and financial support over the years. God bless you for all that you have done and will continue to do. I deeply regret that I will not personally have more time to serve along with you.”

Commenting on Crutchfield’s impact on the Christian City community, Ryden said, “Many who live and serve at Christian City know personally of Bob’s warmth and enthusiasm for the fellowship shared as ‘family’ at Christian City. He was known as a man of both humility and integrity, born of a strong conviction of gratitude for what God had given him. His highest aim for Christian City was the continuance of our ministry commitment and the spiritual well-being of our resident community.”

Crutchfield was one of only three CEOs to serve at Christian City during the organization’s 52-year history. Crutchfield succeeded the non-profit’s first CEO, Bob Puckett. Upon Crutchfield’s retirement in December 2015, Len Romano became President and CEO of Christian City after a 34-year career with YMCA.

“Bob’s legacy will live on at Christian City,” said Romano. “Despite his declining health, he worked tirelessly to facilitate a smooth transition when I assumed the CEO role almost two years ago. His dedication to the ministries was evident in his strong leadership. Bob left big shoes to fill, and I am honored to follow in his footsteps,” Romano said.

Through his commitment to understanding that every person has a unique set of circumstances and needs regardless of their creed, Bob lived by the motto of “Above all else, never waiver from the fundamental calling to minister to the needs of our community in the name of Christ.” This unwavering pursuit changed the lives of hundreds of employees, children, residents, volunteers and supporters throughout his career, according to Christian City.

“Bob was a faithful servant leader,” said Philip Kouns, Chief Operating Officer of Christian City Children’s Village. “We will remember him as a strong, gifted and capable leader during the more than two decades he served as CEO. He demonstrated a genuine love and interest in caring for both the children and seniors living at Christian City.”