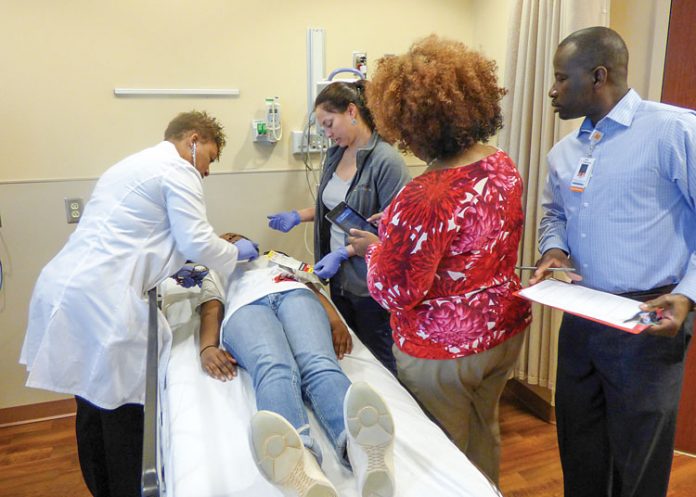 The largest mass casualty drill ever held in Georgia had emergency department staff at Piedmont Fayette Hospital on Feb. 16 serving as one of 26 metro Atlanta hospitals responding to a mock active shooter incident at Sun Trust Park in Cobb County.

“The exercise was very successful for us,” said Piedmont Fayette CEO Michael Burnett. “We were able to demonstrate the strengths and the effectiveness of our team, but we also found some opportunities to improve. We hope that we will never see a situation like this, but we know that we will handle it very well if we do.”

The mock mass casualty event was set around Sun Trust Park in Cobb County, the new home of the Atlanta Braves. The drill involved an active shooter with numerous injuries and the response by multiple metro Atlanta hospitals to deal with an influx of patients.

Set to test the capacity of emergency care in the Atlanta area, Burnett said the drill was the largest ever held in Georgia.

Piedmont Fayette received 25 patients as part of the drill, all students from Luella High School in Locust Grove. The students “arrived” at Piedmont Fayette at 10:44 a.m. on Thursday after having been triaged at the Sun Trust stadium.

The transport, arrival and treatment of victims, along with the metro-wide status of victims, was monitored in real-time by hospital, local emergency management staff and the Ga. Department of Public Health at an incident command center step up on the first floor of the hospital.

Incident command at Piedmont Fayette also tracked the status of other victims in route to the other 25 hospitals participating in the mock casualty drill.

Emergency Department Medical Director Paula Braithwaite and a host of staff in the ED took charge of the young patients as they arrived and began receiving treatment.

The scene was set-up to be as realistic as possible. Prior to coming to the ED, the students had wounds “applied” by make-up artists in another part of the hospital.

The mass casualty drill was coordinated by the Ga. Department of Public Health and the University of Georgia.