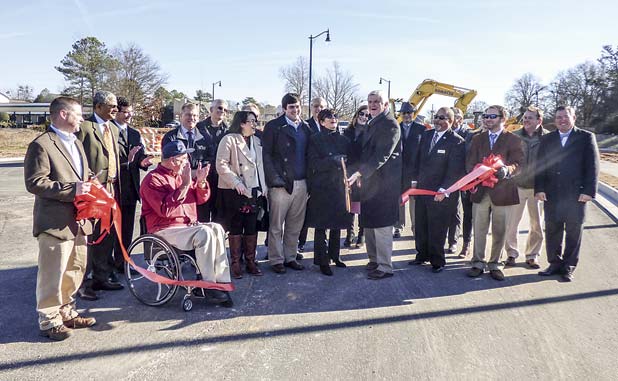 The Jan. 10 dedication of Easterbrook Way, named for the late Fayetteville City Engineer Don Easterbrook and serving as a new roadway connecting the city’s new northside transportation route, was attended by members of Easterbrook’s family as well as current and former city officials, county officials and project staff.
It was years in the making, but now the new traffic realignment linking Ga. Highway 92, Hood Avenue and North Jeff Davis Drive in Fayetteville will soon be open to traffic. The new thoroughfare, Easterbrook Way, is named in honor of the late City Engineer Don Easterbrook.
The 18-month realignment project, approximately two weeks away from opening, is designed to improve the traffic flow on the city’s north side.
Current and former city officials, county officials, city staff, project staff and members of Easterbrook’s family attended the Jan. 10 acknowledgement of the nearly $10 million transportation project and the dedication of Easterbrook Way.
“Don was a great man. We miss him,” said former Mayor Ken Steele, the emotion obvious in his voice. “This (project) will have a lasting impact. It’s the crowning achievement (of Easterbrook’s work with the city) and it will make a positive impact on the community.”
Steele noted Easterbrook’s involvement in multiple infrastructure, transportation and flood control projects that began when the city had only a fraction of the population it has today.
Explaining that the project is ahead of schedule and under budget, Mayor Ed Johnson praised the efforts and the work Easterbrook accomplished over a period of 20 years with the city. Easterbrook passed away in 2012.
Though ahead of schedule, plans to have the last segment of the transportation project open now was delayed due to recent rains and inclement weather. The last section of roadway, between Ga. Highway 85 and North Jeff Davis Drive, is expected to be completed and the road opened in approximately two weeks.
The project relocated the traffic signal from Hwy. 92 and Hwy. 85 a short distance to the south at Hood Avenue. A large roundabout now connects Hood Avenue to Hwy. 92 (Forrest Avenue) on the west side of Hwy. 85.
With the traffic signal relocated, vehicles wanting to continue on Hwy. 92 and bypass downtown Fayetteville can continue across Hwy. 85 on the new roadway section, now known as Easterbrook Way. A short segment of Easterbrook Way opened a few weeks ago to provide access to the Hudson Plaza shopping center.
Easterbrook Way extends along the south side of Hudson Plaza and links with Kathi Avenue by way of another roundabout southeast of Hudson Plaza, and on to North Jeff Davis Drive to the east.
Still another project component included the extension of Church Street from where it previously ended at Georgia Avenue. The new extension ties in with the Easterbrook Way/Kathi Avenue roundabout.
A portion of the Hudson Plaza Shopping Center previously situated perpendicular to Hwy. 85 and across the highway from Hood Avenue was demolished to make way for the realignment project.
The total length of the project was approximately 6,000 feet.
The project, a joint venture of Fayette County and Fayetteville, was funded through the 2004 Special Purpose Local Option Sales Tax (SPLOST).