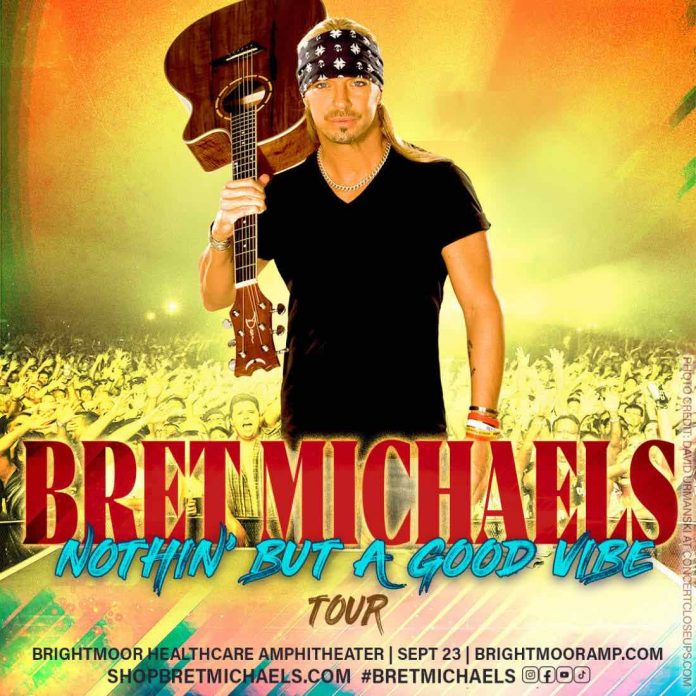 Bret Michaels, who rose to fame with glam-rock band Poison in the 1980s, will bring his solo act to Brightmoor Healthcare Amphitheater in Downtown Fayetteville on Friday, September 23. Tickets go on sale Friday, April 1.

Michaels, Bobby Dall, Rikki Rockett and CC DeVille have toured and recorded albums as Poison since 1986, and they have sold more than 40 million albums and DVDs along the way. They have also released seven studio albums, four live albums, five compilation albums, and 28 singles. Some of their biggest hits include “Nothin’ But A Good Time,” “Every Rose Has Its Thorn,” “Talk Dirty to Me,” “Unskinny Bop,” and “Something to Believe In.”

Michaels will perform at Brightmoor Healthcare Amphitheater as part of his “Nothin’ But A Good Vibe” tour. Tickets are available through www.BrightmoorAmp.com.

The 2022 concert season at Brightmoor Healthcare Amphitheater is already underway, and upcoming concerts include Aaron Lewis April 2, Chris Janson April 22, Clay Walker May 21, Scotty McCreery June 4, Air Supply August 26, KC & the Sunshine Band September 17, and now Bret Michaels September 23. The final concert of the 2022 series will be announced on May 1.