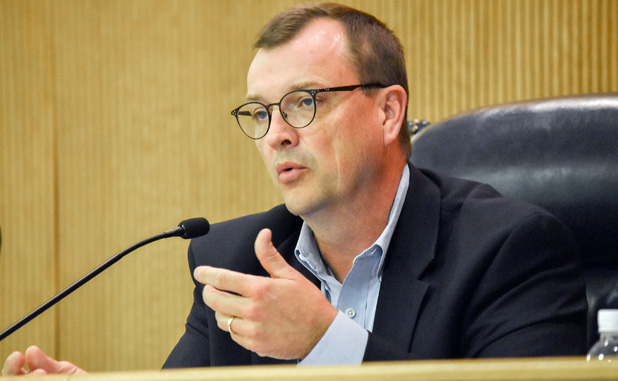 Fayette Commission to consider big-picture overview for residential rezonings; Brown complains about ‘piecemeal’ approach overwhelming infrastructure
The Fayette County Board of Commissioners will again discuss the possibility of a temporary moratorium on rezoning requests at its Aug. 11 regular meeting.
The issue was not a formal agenda item at the July 28 meeting after it was raised by Commissioner Steve Brown, but he took advantage of several opportunities to bring it up during the meeting as the board rejected two rezoning requests that night. His own request to discuss the matter was tabled until this week.
“The most significant problem with the reactionary arrangement is the fragmented, at times incoherent, outcomes. The consequences to the community can be extremely painful,” Brown wrote in a letter to the editor on Page A4.
“Add the private sector’s ability to reap greater profits off of government decisions related to zonings, annexations and enhanced contracts to an already disorganized and disconnected system, and you have a recipe for tragedy,” Brown said.
“If we built the number of houses allowed on land as currently zoned, our infrastructure would fail. Imagine what would happen if the zoning densities were increased across the board,” Brown concluded.
The board has control over land use designations and rezonings in the unincorporated areas outside city limit lines.
The board will also hear an update on the Starr’s Mill path project and possibly give county staff direction on how to complete it.
Last summer the county issued a task order for design-of-path improvements along Redwine Road between Foreston Place and Panther Path. A recommendation memorandum was completed in January and individual meetings were held with the commissioners, but no consensus was reached and the topic has been tabled so a discussion could be held, according to a staff report.
The staff recommendation memo will present five options: a new path with a north crossing; a new path with a south crossing; a tunnel; a high-intensity activated crosswalk beacon at Foreston Place; and rectangular rapid flashing beacons with continued use of a crossing guard at Foreston Place.
There are no public hearings on the agenda.
Two board appointments will be considered. A recommendation for Lavonia Stepherson to fill an unexpired term on the McIntosh Trail Community Service Board was tabled at the July 28 meeting. Stepherson was re-appointed to the Hospital Authority July 19. Ted Kirk is being recommended for appointment to the Region Six Mental Health, Developmental Disabilities, and Addictive Diseases Regional Planning Board for a three-year term.
The consent agenda includes a recommendation to upgrade an office support position at Public Works and the Road Department as well as bids for water distribution parts and Crosstown Water Treatment Plant improvements.
Three proclamation/recognition items are on the agenda pertaining to the Fayette County Water System, which was recently honored with a statewide “best-tasting tap water” award. Two members of its staff were also given awards recently by the Georgia Association of Water Professionals.