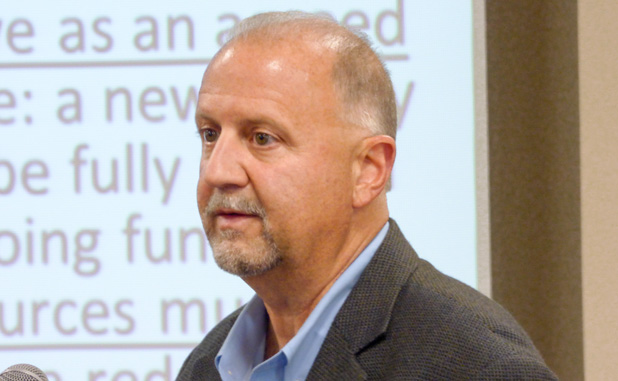 The outcome of a June 27 budget workshop held by the Peachtree City Council was a $33.5 million proposed budget with no millage rate increase, no raises for city employees and a 34 percent reserve fund.
But there was no talk of a tax rate rollback that sometimes accompanies an increase in the amount of revenue the city is expected to collect because of increased property values.
Without a rollback, most city property owners will pay more in city taxes this year than last year, even with an unchanged millage rate. To the average property taxpayer, the net effect is the same as a tax increase: The city will collect more money, and taxpayers will pay more in taxes.
As proposed, Finance Director Paul Salvatore said the FY 2017 general fund budget totals $33,525,752, representing a half-percent increase over the original budget for this year.
The proposed budget comes with no millage increase, thus maintaining the current 6.756 millage rate, and with no staff salary increases or benefits enhancements.
Based on previous discussions, the budget was supposed to include a .25 millage rate increase, but that was eliminated due to the likely 4.5 percent growth in the tax digest.
Budget increases for next year included increased appropriations for employee health insurance, worker’s compensation and general liability coverage. The city will also see a decrease of approximately $100,000 in defined benefits funding.
If adopted in August as presented, the budget will include a reserve percentage of 34 percent, or $11,286,473. The city requires that a minimum 25 percent reserve be maintained.
Reviewing the past five years, Salvatore said salaries have increased 5 percent, health insurance has increased 22 percent and the defined benefits pension has decreased 8 percent.
In terms of prior general fund expenses, City Manager Jon Rorie proposed that the position for an assistant police chief, at $108,512 be carried forward next year. He recommended that the previous allocation of $88,932 for a public works director be eliminated. Rorie recommended that a council retreat-recommended citizen engagement specialist at $86,049 be eliminated along with portable restrooms at $35,000. The portable restrooms can be secured at a later date using other funding sources, he said.
The budget recommendation also included an increase contribution to the Fayette County Development Authority (FCDA) from the current $75,000 to $146,000 which will be in-line with the increased participation by the county’s other municipalities based on population distribution.
CEO Joan Young after the meeting said FCDA is currently the lowest funded of the development authorities in metro Atlanta.
Rorie said the proposed budget also includes a new court clerk position at $20,332.
The council by consensus agreed with all the recommendations.
The budget will include a continuation of $1.8 million for road resurfacing.
The FY 2017 budget forecasts 38.9 percent of revenues coming from property taxes, 20.4 percent from local sales taxes, with the remainder coming from other tax sources.
Primary expense categories include Fire/EMS at 21 percent of the budget, police services at 20 percent and public works at 18 percent, with the remainder split between all other departments. In total, salaries make up 60 percent of the budget, Salvatore said.
Also at the workshop, the council reviewed the bond millage rate which would be positioned at .306 mills, down from .314 mills currently. The bond millage will fall to .301 mills in 2018, .201 mills in 2019 and will be paid off by 2020.
Salvatore during the meeting noted that the decreasing property values that began to dip in 2009 and were at their lowest during 2012-2013 have rebounded. Similarly, sales tax revenues that were at their lowest in 2009 are approaching the point seen in 2007 prior to the Great Recession.
The next budget workshop will be held July 19. The council will adopt the budget in August after the final tax digest numbers are in. The FY 2017 budget becomes effective on Oct. 1.