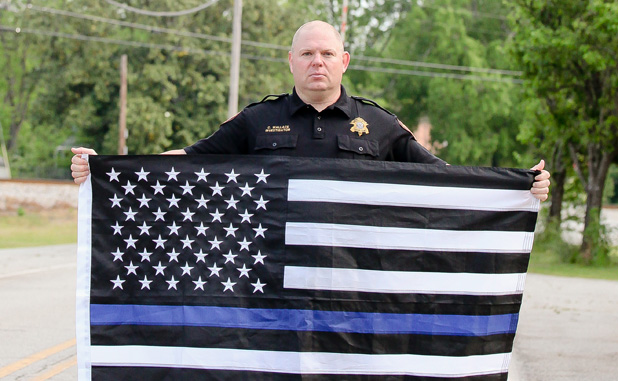 ‘I race for those who can’t’
Fayette County Sheriff’s Office Investigator Chad Wallace has an outlook that has been fading from the American society. He views himself as his “brother’s keeper.” To that end, Wallace recently founded the nonprofit Team BlueLine to raise funds for the families of officers who lost their lives in the line of duty.
Wallace said there were 130 line-of-duty deaths in law enforcement in 2015.
“That is 130 families that lost a husband or wife, mother or father, son or daughter,” said Wallace, who considers himself to be his brother’s keeper. “That is 130 heroes that gave all while protecting and serving their fellow man. Thirty-nine of those officers were killed by gunfire at the hands of others. Already in 2016, we have had 46 heroes give all. We are up 27 percent in the killed-by-gunfire stats.”
Wallace said the nonprofit Team BlueLine was formed earlier this year to raise money for families of the officers that were killed in the line of duty.
“One of the ways we raise money is through Team BlueLine Racing. We have close to 30 team members who use athletic events to raise money,” said Wallace. “Most of the team are made up of triathletes, but there are some who race bicycles or [are involved in] running events. We are made up of active and retired officers, spouses, family members and supporters of the cause. To be part of this team and to wear a team kit you have to be willing to fund-raise each year.”
There are many organizations with a similar calling. So why form another?
“The question has come up many times, why start this? Why start a nonprofit when there are others out there?” Wallace said. “That is a multilayered answer. I am active law enforcement and nothing stings the heart like hearing of another brother or sister who gave all in the line of duty, knowing that could be me leaving a wife and two sons behind every day I head to work. The goal is to come home every day, but what if I didn’t? Who would take care of my family? That question has continued to come up more often as we hear of these deaths.”
Wallace said in 2015 while training for IronMan Maryland, he helped with fund-raising for “Just One Africa,” a company that supplies water filters in Africa.
“As the year kept going, I started to dream of a nonprofit that would provide money for families of my heroes, the ones who gave all in the line of duty,” Wallace explained. “I built a custom racing kit with the Blue Line Flag on the back and Matthew 5:9 — ‘Blessed are the peacemakers, for they shall be called children of God.’ I also started to finish my races with a Blue Line Flag to honor those who gave all. As I was racing an early race, God really laid on my heart the quote, ‘I race for those who can’t.’ This quote always keeps me going, knowing no matter how bad I am doing or hurting, I am still able to get out here and compete.”
Wallace said his passion for a nonprofit, along with his dream, continued to grow.
“Why not combine the passion of racing triathlons with the passion of helping others, to be my brother’s keeper? I am a dreamer, but I find the hardest thing for a dreamer to do, is to put it to work. Around the start of the year, I was really convicted to put these dreams to work. So I started a GoFundMe page to help raise the start-up cost. To hire a company to do this, it would take over $1,000. I stepped out in faith and started the process,” Wallace said. “God just kind of blew my doors down from that point on. I had multiple local business owners contact me to help with this. The money continued to come in and the fees were covered. So many people reached out to help get this going.”
It took five months for the nonprofit paperwork to be processed. Today, Team BlueLine is officially up and running as a charitable, tax deductible organization.
“The race team really came together with people reaching out from all over the United States,” Wallace said. “I have been humbled and blown away by all the response and people wanting to be involved in this foundation.”
Wallace said Team BlueLine was recently honored with a generous donation at a Fayetteville City Council meeting from Kevin and Anne Miller in the name of Officer Dylan Bell with the Fayetteville Police Department. Officer Bell responded to a call and helped save the life of the Miller’s daughter, Wallace noted.
“This year Team BlueLine will be fund-raising for the family of Anthony ‘T.J.’ Freeman of the Bibb County Sheriff’s Office,” Wallace said. “T.J. is survived by his wife Jessica and children Braden and Blaiklyn. On May 5 of this year, T.J. and his K-9 partner were responding to a vehicle pursuit when the suspect’s vehicle rammed his patrol car. T.J. suffered fatal injuries during the crash. That day his family and both blood and blue lost a hero.”
Each member of Team BlueLine will finish a race with a BlueLine Flag in T.J.’s memory and honor. To help Team BlueLine honor this hero who gave his life in the line of duty and to learn more about the organization visit https://www.crowdrise.com/teamblueline.