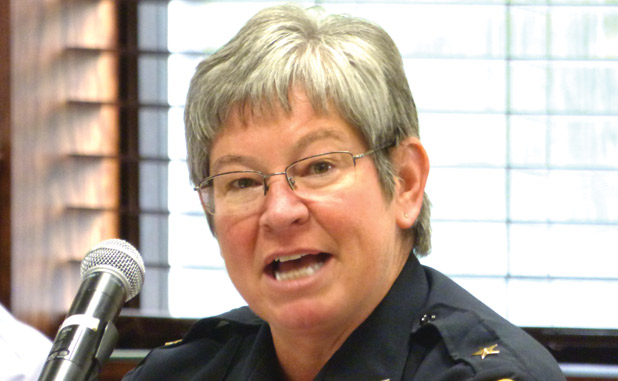 The Peachtree City Council as part of the continuing series of workshops for 2016 met May 3 to hear reports such as those dealing with law enforcement and fire and emergency services.

Reporting on the police department, Chief Janet Moon reviewed the types of crimes in the city over the past few years.

Thefts topped the list in part 1 serious crimes, both in 2015 and for the past several years.

An average from 2005-2015 showed thefts at 63 percent of the crimes reported in the city, with motor vehicle thefts (including golf carts) at 19 percent, burglaries at 11 percent and all other serious crimes at 7 percent.

Moon said thefts include offenses such as entering autos and shoplifting along with all other types of thefts. She advised citizens to never leave valuables in plain sight in a vehicle.

The largest volume of calls for police service in 2015 came from the northwest portion of the city, followed by the west central area and the east central area.

There were 864 traffic collisions in 2015. The top traffic accident locations came as no surprise. Those were Ga. Highway 54 and Ga. Highway 74, followed by Hwy. 54 and Peachtree Parkway, Hwy. 74 and Crosstown, Hwy. 54 and Huddleston Road and Hwy. 74 and Kedron Drive.

The top location for accidents, highways 54 and 74, saw 78 percent of accidents caused by following too close.

Emergency medical service calls continue to increase incrementally over the years. There were approximately 1,500 calls in 2000 and by 2015 the number had increased to approximately 3,000.

O’Conor provided a breakdown of ambulance service calls by age group. As expected, 33 percent of ambulance calls came from people 80 years old and above. That age group represents 3 percent of the city’s population.

O’Conor said emergency medical services calls should be expected to rise as the population ages. Fire risk is also expected to increase as residential and other structures age.

The largest number of calls for fire and emergency services come from the area of highways 54 and 74 and the west side residential areas, the central portion of the city and areas south of Crosstown Drive.

The council has been holding workshop sessions once a month since the beginning of the year in lieu of holding one day-long retreat meeting.

Expected in the coming weeks is another workshop on goals and objectives for the city which will lead into budget discussions to be held this summer.