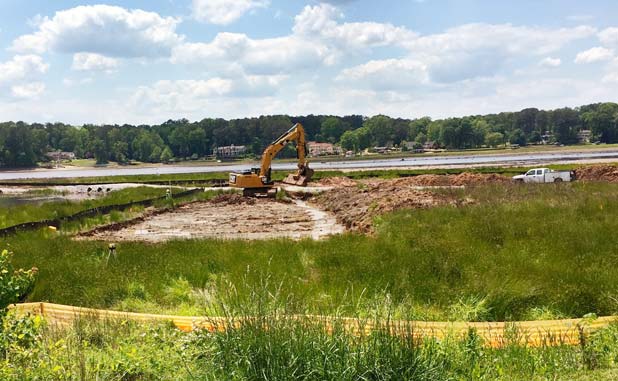 Drake Field to be restored

Last week’s word from Fayette County Administrator Steve Rapson that the dredging work on Lake Peachtree would likely conclude within days was correct. The last dirt was dug on March 24 and the lake can begin to refill.

Peachtree City Clerk Betsy Tyler on March 28 said dredging contractor Massana Construction reported on March 24 that dredging work in the lake bed was complete. Residents will continue to see Massana in the Drake Field area for a few days as they clean up the work site before turning it over to the city, Tyler said.

“Although this is a huge milestone that will allow the lake to begin refilling (the level rose by 18 inches during the night of March 24), the City of Peachtree City’s work is really just beginning,” Tyler said. ”Many components of the Lake Peachtree projects will continue in the coming weeks, months and years.”

Tyler said residents will continue to see plant stalks and floating debris from the vegetation removal project in the fall while the lake refills. Peachtree City’s contractor, Estate Management Services, is scheduled to return in early April, provided the lake level is adequate, with the floating harvester to remove the debris.

Peachtree City crews will also begin working on the restoration of Drake Field as a passive park so that it can be enjoyed again as soon as possible, said Tyler.

“The installation of the new Battery Way dock, which has been fabricated and delivered, has also been scheduled for late April, pending weather conditions and the pool level of the Lake,” Tyler said.

Tyler noted that fishing in Lake Peachtree may take a bit longer to accomplish, adding that city staff will be working closely with the Georgia Department of Natural Resources to bring fishing back to the lake.

“Following several months at full pool to allow oxygen levels to stabilize and to let the current fish population re-adapt to the filled lake, Peachtree City and Fayette County will restock the lake based on DNR recommendations,” said Tyler.

Fayette County officials also are happy that their much-delayed project has been completed.

Board of Commissioners Chairman Charles Oddo made the announcement during the day Thursday and that evening during the regular board meeting, noting that the lake is now being refilled.

“We’re very pleased to bring this portion of the lake project to a close, and timing could not be better with the rain that is predicted for Thursday evening,” said Oddo. “Mother Nature has finally smiled on us!”

Massana will continue to wrap up the project with the removal of construction materials and equipment from Drake Field before turning it back over to Peachtree City for restoration, according to county officials.

“Thanks to all collaborative effort between CH2M Hill, Peachtree City officials, county leaders and our contractor Massana, I’m proud to say our beautiful Lake Peachtree is back in service and in better condition than ever,” said Lee Pope, director of the Fayette County Water System.

“No one is happier than me that we’re out of the lake bed,” said county administrator Steve Rapson. “Time to bring beautiful Lake Peachtree back to its full glory.”

Tyler said the city in the near future will also begin the process of designing the replacement of the spillway, with replacement possibly as early as 2020, and with Fayette County contributing $2 million toward that project.

By way of background, Tyler said Lake Peachtree is owned by Peachtree City and managed by Fayette County as part of the Water System.

The lake was originally lowered in January of 2014 for private shoreline and dock maintenance. During that time, issues with the spillway were discovered. The Georgia Safe Dams Commission reclassified the dam as a Category 1 structure and refused to allow the lake to be refilled. This new classification would have led to significant additional costs to upgrade the dam before the lake could be refilled, said Tyler.

Peachtree City contested the reclassification in the summer of 2014 and initiated more detailed dam breach modeling to assist in the determination. The state notified the city of the reversal of the dam classification to Category 2 in December 2014, Tyler said.

“By that time, Fayette County had issued bids for the planned dredging of lake, and contracts were awarded in January 2015. Fayette County also proceeded with temporary repairs to the spillway, now allowed due to the return to the Category 2 dam classification, so the lake could be refilled upon completion of the dredging,” said Tyler. “And then the rains came.”

In 2015, said Tyler, Peachtree City received an estimated 24 inches of rain above the five-year average rainfall, extending the dredging project by months. Because it serves as a stormwater collector from a number of streams, Lake Peachtree’s water level could be raised by five to eight feet following a two-inch rain event. This happened several times during the project, submerging not only the contractor’s equipment, but also the haul roads built to support the weight of the dump trucks removing siltation, Tyler explained. — Additional reporting by Monroe Roark