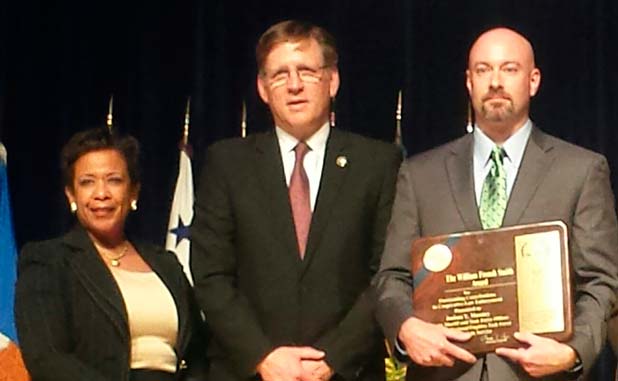 Fayette County Sheriff’s Investigator Joshua Mauney was the recent recipient of a national award for his contributions with the U.S. Marshals Southeast Regional Task Force that led to the arrest of an individual wanted on 22 warrants from five agencies.

U.S. Attorney General Loretta Lynch presented the awards at the ceremony held at the Daughters of the American Revolution Constitution Hall.

“We are very proud of Investigator Mauney for his excellent work and his remarkable commitment to Fayette County and the metro Atlanta area,” said Fayette County Sheriff Barry Babb.

Representing Fayette County on the U.S. Marshals Southeast Regional Task Force, Mauney and two task force members from other agencies were the recipients of the award for their investigation that led to the arrest of fugitive Billy Lee Owen in June 2014. Owen was wanted on 22 outstanding warrants from five separate agencies, Babb said.

“The fugitive had a long criminal history as well as a lack of regard for public safety, leading law enforcement on two vehicle pursuits in a stolen vehicle, even striking a task force officer during one of the pursuits,” Babb said.