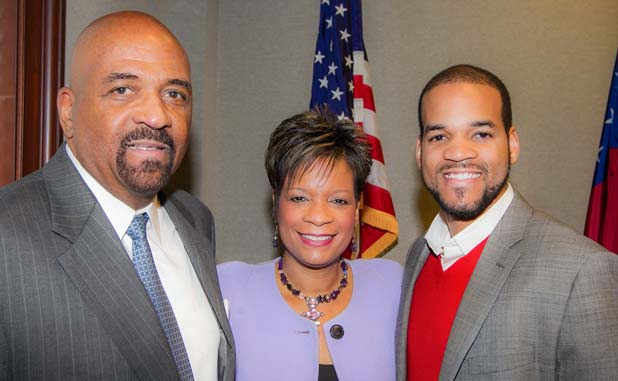 UPDATE: Parking for the June 11 burial of Commissioner Pota Coston at Hopeful Primitive Baptist Church, located at Ga. Highway 92 and New Hope Road, will be available a short distance to the east at the Greater Heights Missionary Church located at 1039 New Hope Road. Additionally, shuttle buses from AV-Pride will provide transport for those attending the service from North Fayette United Methodist Church, located at 847 New Hope Road, beginning at 8:30 a.m. The burial service will begin at 9 a.m. Coston’s body will be transported to Hopeful along a portion of New Hope Road by horse-drawn caisson.

Original story: Funeral plans have been announced for Pota Coston, the first African American woman elected to countywide public office in Fayette County, who died Friday, July 3, after a five-month battle with breast cancer. She was 57.

She is the first Fayette elected official to die in office since Board of Education member Sam Tolbert, who died in September of 2011.

Coston served on the board six months after being sworn in Jan. 2 and named vice chairman by her peers at her first board meeting Jan. 8. A special election will be called in the coming months to fill her seat.

“Each of us not only grieves at the passing of a tremendous person but also for the loss her family suffers,” county manager Steve Rapson stated. “Pota was a class act and helped bring a sense of harmony and inclusiveness to all residents of Fayette County.”

According to officials, the Sheriff’s Department and Marshal’s Office will be handling traffic and shuttle buses are planned to be run from area churches to help ease parking issues.

The wake for Pota Coston will be at New Hope Baptist Church North, New Hope Road, Fayetteville, at 7 p.m. on Friday, July 10.

From 9 a.m. to 11 a.m., Saturday, July 11, her body will lie in state at the Hopeful Primitive Baptist Church, 1247 Highway 92, Fayetteville. The burial will follow immediately after that in the Hopeful Church Cemetery.

The church and historic cemetery have been the recipients of recent extensive renovation by many volunteers. Coston was “very active in helping with the renovations with her time and money,” said her friend, Dawn Oparah.

More than 200 people gathered at a July 2 prayer vigil in the commission meeting room as 24 friends, colleagues and her son, Bernie, 29, praised Coston’s leadership and shared personal stories of her impact on their lives.

In November 2014, Coston won the first-ever district election for a county commission seat, the result of a lawsuit brought by the NAACP that is currently on appeal by the county and the Fayette County Board of Education..

A resident of Tyrone, she retired in 2008 after a 29-year career in federal law enforcement. According to the biographical information on her campaign website, she held several positions of increasing managerial responsibility in the Internal Revenue Service’s Criminal Investigation business division, with experience in the southeastern and midwestern sections of the United States as well as in Washington, D.C. She also worked extensively with the Department of the Treasury and Department of Justice as well as other law enforcement agencies.

More recently she was a member of more than a dozen civic organizations such as the county’s Ethics Board, the Chamber of Commerce, Fayette FACTOR, Friends of the Tyrone Library, and the River Oaks Advisory Board. She was a member of Elizabeth Baptist Church.

Before winning her Board of Commissioners seat, she came up just short in two attempts at a spot on the Tyrone Town Council in 2011 and 2013.

Coston was a native of Elkins, West Virginia, and graduated from Marshall University, as did her husband, Bernard.

She was profiled in Fayette Woman magazine just after taking office, when she “changed local history,” according to the publication.

“She was such an inspiration,” Veronica Hyman-Pillot, Coston’s friend and former employee, told FW. “Over the years, she’s served as an incredible mentor for young people from all walks of life. She’s very compassionate and she has a real eye for seeing people’s talents and abilities – and for helping them find their areas of weakness and turn them into strengths. She inspired me to pursue my goals, and I wouldn’t have achieved my level of success in the organization without her influence.”

One of the local organizations that benefited most from Coston’s involvement is the Association of Village PRIDE, Inc. (AVPRIDE), which specializes in leadership development for teens and young adults. She began as director of career exploration and eventually became director of AVPRIDE’s workforce development program, coordinating and participating in numerous initiatives to help youth in the community. She continued as a consultant while serving as a county commissioner.

“She just blew me away,” Pam Reid, director of AVPRIDE, told FW. “Not only her experience, which is tremendous, but the heart she has for community and youth.”

Fellow commissioner David Barlow met Coston a few years ago when they stood on opposite sides of the same Tyrone street every morning — Coston running for the Town Council and Barlow campaigning for mayoral candidate (now mayor) Eric Dial. Their friendship began over those conversations about faith and community involvement, which meant both of them turned up at the same local events on a frequent basis.

“To meet Pota was to meet a beautiful, precious lady who never had a harsh, ugly word for anyone,” said Barlow. “She and I had many discussions regarding Fayette County and how much we loved to see Fayette County grow and prosper and how God was using us in different ways to improve our community.”

Once they became colleagues on the Board of Commissioners, Barlow said Coston began working in earnest to represent the entire county as well as her district, and they often traveled together to events across the county.

“I looked forward to serving with Commissioner Coston throughout the years ahead,” he said. “Her memory will forever be linked to Fayette County and I will always remember her as my friend.”

She is survived by her husband, Bernard Coston, and their son, Bernie, both of whom live in Tyrone.