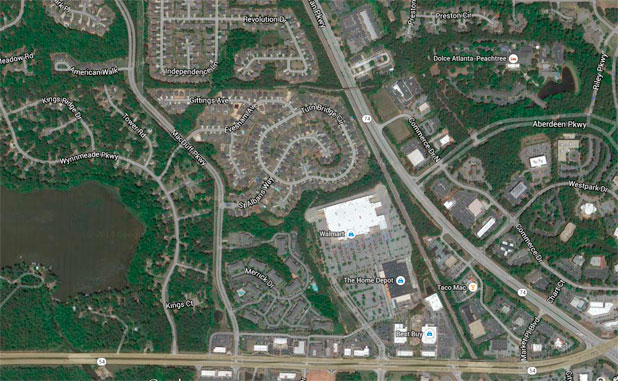 ‘What MacDuff looks like now, it’s not going to look the same at the end of the project’

“This is not going to be Peachtree Parkway.” Those were the words of Peachtree City City Manager Jim Pennington in describing the features incorporated into the extension of MacDuff Parkway that will soon see the initial phase of construction.

Currently MacDuff is a one-way in and one-way out dead-end road, frustrating many Centennial subdivision residents contending with long waits at the single traffic light allowing them access to Ga. Highway 54 West.

An April 2 update to the Peachtree City Council on the MacDuff Parkway extension project and the bridge at Senoia Road came with details of what the new roadway will look like and a conservative time frame for its completion.

City Engineer David Borkowski and Community Services Director Jon Rorie on April 2 gave the council a look at the features to be incorporated into the 3-mile roadway, two-thirds of which have yet to be constructed.

The parkway will have 2-way stop intersections in three locations, each of which will include a raised table-top feature with a “safety refuge” area in the median. Staff said the large table-top area will serve as a traffic-calming measure.

The project will also include turn lanes at intersections.

Another feature associated with the project will be a golf cart tunnel on the south end of the parkway approximately one block north of Ga. Highway 54 and a new cart path that will extend some distance to the east and connect with the existing path.

“We’re looking at (the parkway) from one end to the other. What MacDuff looks like now, it’s not going to look the same at the end of the project,” Rorie said.

Using a conservative estimate, Rorie said the timeline for the completion of the project could extend to 20 months.

In terms of a timeline, and again using conservative estimates, the road project is divided into three segments. The first, from the existing roadway to the entrance to the Everton subdivision, totaling 1,400 feet, has the permitting compete with construction time estimated at six months.

The second segment, from Everton to the Scarbrough tract to the north and totaling 6,330 feet, has an estimated permitting and construction timeline of up to 23 months.

The third segment, a 1,900 ft. section from the Wieland tract to Senoia Road, which includes the bridge at Senoia Road, has an estimated permitting and construction timeline of up to 22 months.

Borkowski said the area of Senoia Road where the parkway intersects will have to be raised approximately seven feet. That construction work could require a portion of Senoia Road to be closed for six to nine months.

Referencing MacDuff as a complicated project, Rorie said the road design is complete and “the city is ready.”

Pennington during the discussion said the traffic-calming features incorporated into MacDuff Parkway would make it a “calm” drive, distinguishing it from Peachtree Parkway.