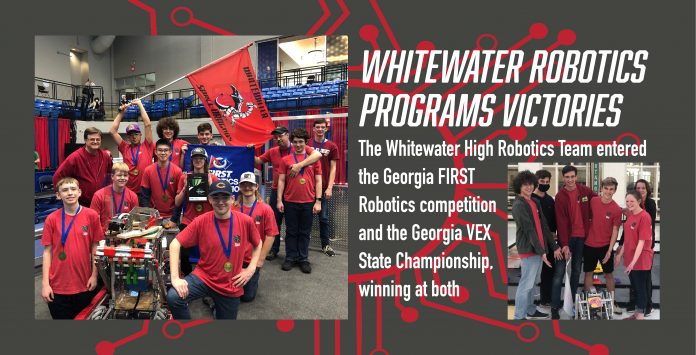 The Whitewater High Robotics Team is programming victories, both large and small. Recent forays into the Georgia FIRST Robotics competition and the Georgia VEX State Championship ended with the Wildcats winning at both.

For FIRST, teams build a large robot for a race scooping up oversized tennis balls and shooting them in a basket. The end game is to lift up off the ground and climb up monkey bars.

Whitewater’s large robot was part of the winning alliance at the district competition. A qualifying event, the win sets them up in good position as they try to earn a spot at the state competition in April.

With a strong showing at state, their small robot qualified for the VEX Worlds competition in Dallas, TX in May. The team will compete with 800 teams from around the world.

For VEX, teams build a small robot to fight over game pieces, climb onto, and balance on a platform.

The team won the “Create” award at the state competition. The Create Award is presented to a team whose robot design incorporates a creative engineering solution to the design challenges of this season’s game. Key criteria include: Robot has a well-crafted, unique design solution which demonstrates creative thinking; team has demonstrated a highly creative design process and methodology; team has committed to ambitious and creative approaches to solving the game challenge; students understand and explain how they worked together to develop their robot.

“I am very proud of our teams,” said team coach Jon Johnson. “They have taken their engineering studies to a high level of design, build, test, performance and, of course, iteration, iteration, and more iteration.”