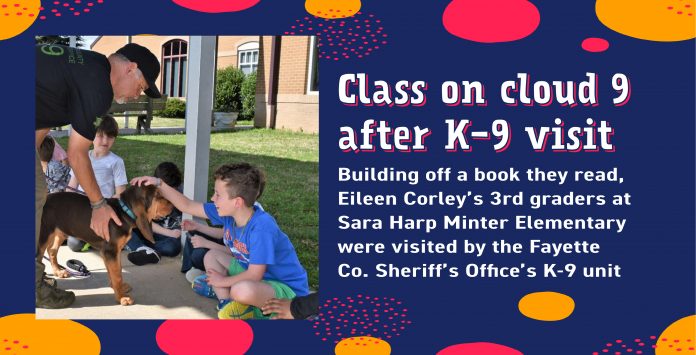 A lucky class at Sara Harp Minter Elementary got to meet a new four-legged hero when Eileen Corley’s 3rd graders were visited by the Fayette County Sheriff’s Office’s K-9 unit.

Earlier this semester, Corley’s class read “Ellie’s Story: A Puppy Tale” about a dog whose sole mission in life is to help people by rescuing them. In the book, the dog is a K-9 dog who searches and rescues people who are lost.

“My class loved the book and became very interested in the job of a K-9 handler,” said Corley.

Several years back when she read to her class, she found one of her students was related to Shane Whitlock, a K-9 handler with the Fayette County Sheriff’s Office. He visited the class, and so Corley reached out to him to make a return visit.

Lieutenant Whitlock, his new puppy Buckeye, and several members of the K-9 unit showed the students how the dog tracks a person through their scent and by rewarding him when they rescue a person. Students were able to see how there were similarities to what the dog did in the book, but also how it was different.

“The students not only read, comprehended, and explained the details of the book, but they now have a first-hand experience of seeing a K-9 dog in action,” said Corley. “I believe this learning opportunity is going to be remembered by all of my class for a long time to come. In fact, several of my students have stated that they hope to be a K-9 handler or work with the police department when they grow up. What better way to get them excited about their future than by having them learn from the professionals!”