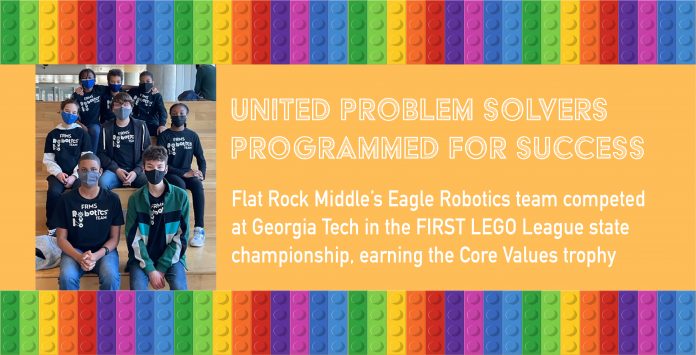 The United Problem Solvers are among the finest FIRST LEGO League squads in Georgia. For the fourth year in a row, Flat Rock Middle’s Eagle Robotics Team competed at the state level and beat out over 400 teams for a coveted LEGO trophy, winning the Core Values Award.

FIRST LEGO League Challenge is the division for 4th-8th graders involved in FIRST. Friendly competition is at the heart of Challenge, as teams of students engage in research, problem-solving, coding, and engineering – building and programming a LEGO robot that navigates the missions of a robot game.

A Core Values win for the team meant that they embodied the key principles of FIRST in everything they did.

“A core values win says that, while those judges didn’t see the awesomeness of their project, they recognized that our kids embodied what FIRST stands for: Teamwork, inclusion, impact, innovation, discovery and fun,” said Melissa Lohr. “These are the victories that matter most to me and will take them far in life.”