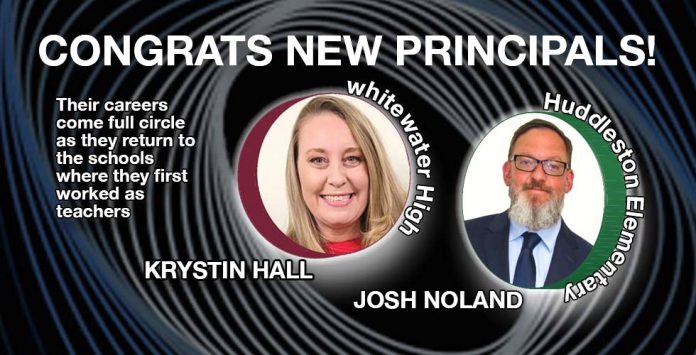 The careers of two new principals have come full circle as they are now heading up the same schools where they began their teaching careers with Fayette County Public Schools.

Krystin Hall, who has served as assistant principal at Starr’s Mill High for the past six years, has been named the new principal at Whitewater High. She replaces Steve Cole who was promoted to assistant superintendent of operations in January.

Hall says she is proud to return to the school where she started her career in Fayette County, and is looking forward to continuing building on its reputation for excellence.

“It is with great pride and excitement that I rejoin the Whitewater High School family as principal. The Whitewater community is rich in tradition and continuously excels in academics, athletics and arts,” says Hall. “My goal is to support growth in the school environment through connection, culture, communication and curriculum so that all stakeholders are valued and students achieve their personal best.”

Hall has been an educator for 20 years.

Josh Noland, who has served as assistant principal at Robert J. Burch Elementary for the last four years, has been named the new principal at Huddleston Elementary. He replaces Heidi Pfannenstiel who was promoted to director of elementary in education in January.

Noland has worked his entire career in Fayette County Public Schools, starting in 2004 as a teacher at Huddleston Elementary. He taught at the school for 10 years before serving as a math instructional support teacher for the school system, and then receiving a promotion to assistant principal at Robert J. Burch Elementary in 2017.

Noland says the homecoming is a privilege and he is looking forward to working with the students, parents and staff.

” I am very fortunate to return to the Huddleston community. The staff and students have given me such a warm welcome! I look forward to joining the Huddleston family carrying on the great work already in progress,” says Noland. “We will continue to focus on high student achievement and providing unique learning opportunities for our students fostered by the diligent work of our staff.”

Noland has been an educator for 18 years.