Quarantined numbers fall to 91 — 30% of the previous week’s total; will mask mandate be lifted this week? —

The Covid-19 disruption of Fayette Public Schools is on a steep decline, according to the weekly report filed Sept. 10.

New test-positive cases in the classrooms fell to 58 last week, the system report showed. That’s down from 110 the previous week. 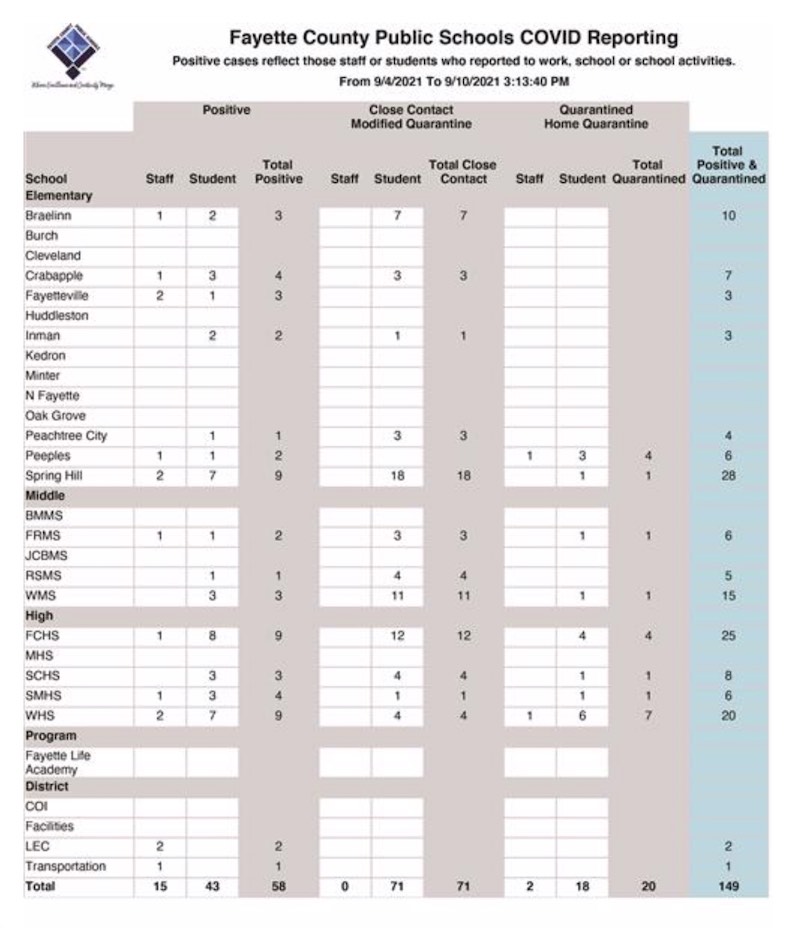 In addition the virus exacted a smaller toll on individual schools last week. Two weeks ago elementary schools reported 44 cases, but this week the number fell to 24. Two weeks ago, middle schools were hard-hit with 30 cases. That fell to 6 total this past week. And high schools also improved from 36 caes 2 weeks ago to 25 cases this past week.

The most cases among elementaries was a Spring Hill with 2 staff members and 7 students, resulting in 19 additional students in some form of quarantine.

Middle schools — struggling 2 weeks ago — lowered their cases dramatically with Whitewater having 3 for the highest number.

The total positive and quarantined total was only 36% of the total the previous week — 149 last week compared to 419 the week before.

The whole system is under a face covering mandate since Aug. 24. The mandate was effective through later this week, Sept. 17, depending on whether the system drops below a 1% positive test-confirmed new case rate of 1% for all schools combined for 2 consecutive weeks.

With a student population of just under 20,000 and a staffing level of more than 2,000, that would put the target number at somewhere above 200 new cases a week, if both staff and students were part of the equation. There were 110 cases 2 weeks ago and 58 cases this past week, so parents, students and staffers will be looking to see if the mask mandate for classrooms will be lifted later this week. Even if it is, all students riding school buses will continue to have to mask up, per federal regulations.