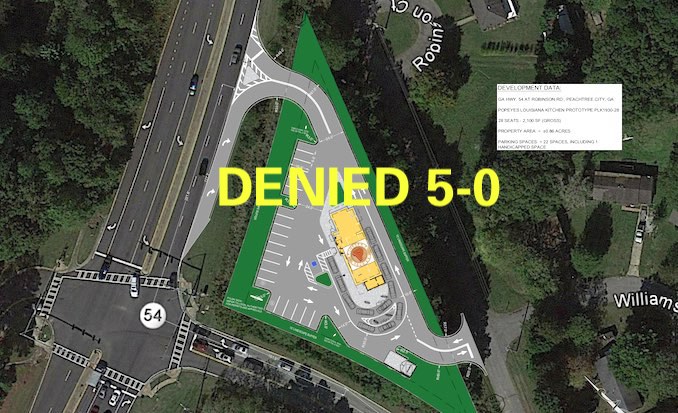 A rezoning request to establish a fast food restaurant on a small lot at Robinson Road and Ga. Highway 54 was recommended for denial Sept. 14 by the Peachtree City Planning Commission. The commission in October 2015 also recommended denial for a rezoning request that would have put a medical office building on the site.

The rezoning request asked that the approximately 0.9-acre property at Hwy. 54 and Robinson Road, bordered by Robinson Court, be rezoned from R-43 (single-family) to GC (general commercial).  The GC zoning was requested to accommodate a drive-thru window.

The applicant wants to construct a Popeye’s Louisiana Kitchen restaurant on the site totaling 2,100 sq. ft. with 28 seats and 22 parking spaces.

Though zoned for single-family residential, city planning staff noted that the triangular-shaped property situated directly on the highway is designated for office use on the city’s Land Use Map.

Staff said trip generation data projected 470 vehicular trips per day which, based on the square footage of the building, is 48 times the impact of an office use.

Overall, planning staff was of the opinion that the proposed rezoning does not meet a majority of the criteria for rezoning, and recommended denial of the request.

Representing the applicant, attorney Rick Lindsay said the property has been undeveloped “forever,” and noted the problematic topographical nature of the site which he believed could be successfully addressed.

Lindsey questioned whether the site would be proposed for office use in the future, given current office vacancies and the emerging trend of many people now working at home.

Lindsey also noted that much of the area along Hwy. 54 today is commercial.

Chairman Frank Destadio during the discussion expressed a concern over the traffic impact that would be generated, including with a new school coming to the area.

Others on the commission agreed, with some voicing the opinion that the site would be better utilized as office space and noting that the topography of the site is challenging.

In the end, commissioners voted 5-0 to recommend denial of the rezoning request.

If desired, the rezoning request can be taken to the City Council.

Looking back, it was in October 2015 that applicant Urgent Pain LLC requested a rezoning from R-43 to Limited Use Commercial (LUC) to construct a two-story office building totaling 6,250 sq. ft.

The request was recommended for denial by unanimous vote by the Peachtree City Planning Commission on Oct. 12.

The issue was to be heard by the City Council on Oct. 15, but was withdrawn by the applicant.

The size, shape and configuration of the property were established as part of the Hwy. 54 road re-widening and the realignment of Robinson Road, city staff said at the time, adding that it would likely be difficult, if not impossible, to develop the property as currently zoned without granting numerous variances.

Nearly one-third of Fayette residents have gotten at least 1 Covid...