Here’s the Covid-19 pandemic report from the Georgia Department of Public Health for midday, March 29:

One more Fayette Countian has been diagnosed with the Covid-19 respiratory illness since noon Saturday, bringing the total number of confirmed cases in Fayette to 26. There’s no official report of how many of those 26 diagnosed have been hospitalized versus how many were sent home to self-quarantine.

The fatality rate in Fayette has increased by one to a total of 3, all in their late 70s to early 80s.. For the first time DPH is reporting specific details about the age and sex of those who have succumbed to Covid-19 by county. The fatalities in Fayette are as follows: Male, age 83; male, age 79; and female, age 77. All three had underlying medical issues.

Neighboring Coweta County has 22 diagnosed coronavirus illnesses and 2 reported deaths: a male, age 77, and a female, age 42. Both had underlying medical problems, according to DPH.

The chart of fatalities is nearby in this article.

The number of statewide hospitalized confirmed illnesses rose to 666 as of March 29, which is 25.12% of the total number of reported cases. That is an increase of 49 over the previous day, an increase of 7.9%.

As shown by DPH figures, hospitalizations of testing-confirmed illnesses represent about one out every four persons diagnosed with Covid-19. To put it another way, three out of four Covid-19 confirmed cases did not require hospitalization.

Here are other figures that don’t show up in the publicly available statistics: 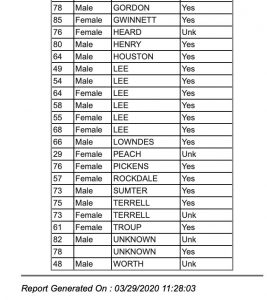 (1) The number of people who are hospitalized with respiratory illnesses but who either haven’t received the tests that are still in short supply or whose test results haven’t come back yet;

(2) The actual number of people who have the coronavirus but are showing no symptoms or only mild symptoms of the respiratory illness.

(3) The total number of people who have already contracted the coronavirus since its introduction into the United States, but who have since completely recovered.

Testing in Georgia has surpassed the five-figure mark, with 10,669 tests having been handled by commercial laboratories. Of that number, 2,360 of those tests have come back with a positive confirmation of Covid-19, a positive rate of 22%.

Statewide, the confirmed cases are split evenly between male and female (48% each) with 4% unknown.

By age group, the Covid-19 cases among persons ages 18 to 59 represent 56% of the total cases, while those over age 60 account for 35% of all cases. Those under 18 are still only 1% of the total, while 8% of the cases involve unreported ages.