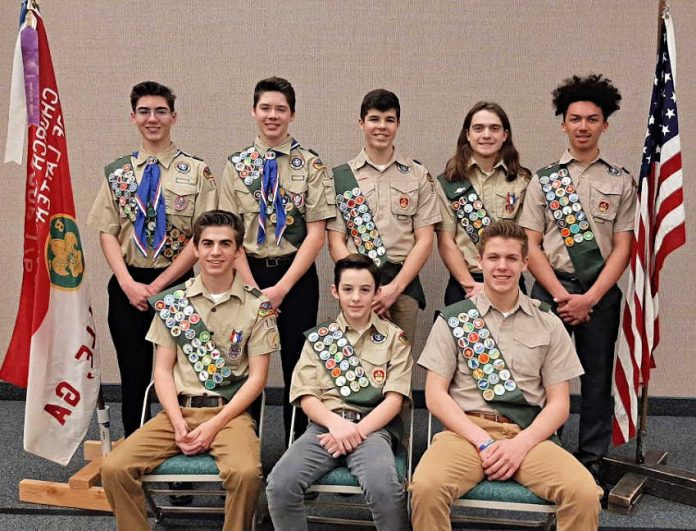 Eight young men will receive the highest award in the Boy Scout program. Six boys are members of Troop 176, led by Kevin Coburn. Two belong to Troop 276, led by Scoutmaster Kai Thomsen and assisted by Glenn Goorsky. Both troops hail from the Church of Jesus Christ of Latter-day Saints located on Redwine Road in Fayetteville.

Bruce Allen organized a drive for the Provident Pantry shelter in Fayetteville. He obtained a list of items most commonly needed at the shelter and collected them from his church and local Peachtree city neighborhoods. When he delivered the donated items, Sharon Witchey at the Promise Place said it was the biggest donation they had ever received.

Will Allen stained the back entrance and installed a ceiling fan at the Midwest Foodbank in Peachtree City. Will has volunteered many times there through church, school, and scouting and when thinking about where he wanted to do his Eagle project knew immediately that was where he wanted to do it.

Lincoln Allred had enjoyed playing Gaga ball at scout camps in the past and was inspired to build one for Sara Harp Minter Elementary. Lincoln asked for donations and in return, the sponsor received a loaf of his homemade cinnamon roll bread. He raised $500 needed for the project. Lincoln has three younger siblings who get to play in the Gaga ball pit every day at recess.

Logan Donaldson met a science teacher at Whitewater High School who wanted to utilize the property behind the school better. Logan and Troop 176 removed a shed, cleared the land, and built a trail. This enabled students to access a pond to grant the students use of an outdoor science classroom.

Jacob Okonkwo, says, “I found out that many foster children are moving with their belongings in garbage bags. When I found this out, I knew my Eagle Project would be to collect suitcases for them. I wanted to send them from home to home with something special, sent with love if you will, hence my project name ‘Sent with Love.’ I was able to collect more than 50 suitcases thanks to our great community.”

John-Paul Parks worked with Operation Gratitude which sends individually-addressed Care packages to military and first responders. JP organized a community activity and pancake breakfast to teach attendees how to make paracord survival bracelets and write thank you notes to be included in the Care packages. His goal was 250, but through his troop and community efforts, he was able to send more than 400 bracelets to Operation Gratitude.

Dane Richards painted a US map on the playground at Inman Elementary school for educational purposes. Dr. Robinson, the principal, says he sees the students outside playing on it and learning from it every day.

The boys were expected to receive their Eagle awards in a Court of Honor on March 15. Due to the Coronavirus, the ceremony has been post-poned.