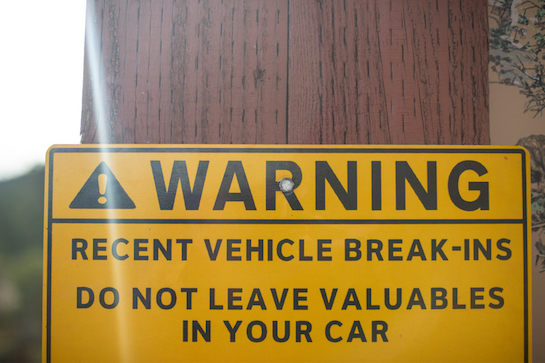 Crime statistics from law enforcement agencies across Fayette County continue to show that motorists should not leave vehicles unlocked and should never leave valuables in their vehicles. Two recent incidents in Peachtree City and Fayetteville only serve to reinforce that advice.

One of those incidents occurred Feb. 11 at a gym on Ga. Highway 54 East in Peachtree City.

Officers responded at approximately 9:30 p.m. and met with the vehicle owner in reference to an entering auto call. The victim said he had parked his vehicle in the parking lot, but was unsure if he locked the vehicle doors, Peachtree City police reports said.

The owner stated that when he returned to his vehicle his wallet was missing, along with several credit cards and his driver’s license, according to police reports.

Another entering auto was reported Feb. 7 pertaining to a theft that may have occurred on Feb. 5 in Fayetteville at a gym at Banks Crossing on Ga. Highway 85 North.

Fayetteville officers responded to the call, with the complainant having entered the gym at around 9:15 p.m. on Feb. 5 and returning to the vehicle at approximately 10:25 p.m. to find items missing from the vehicle, said Fayetteville Police Department spokesperson Ann Marie Burdett.

Burdett said the complainant was uncertain if the vehicle was left unlocked prior to going to the gym. The complainant said a wallet containing $1,810 along with an Apple watch was missing from the center console of the vehicle.

Burdett said the complainant stated to police that the incident was not reported earlier because they believed it may have been their fault if the vehicle was left unlocked.