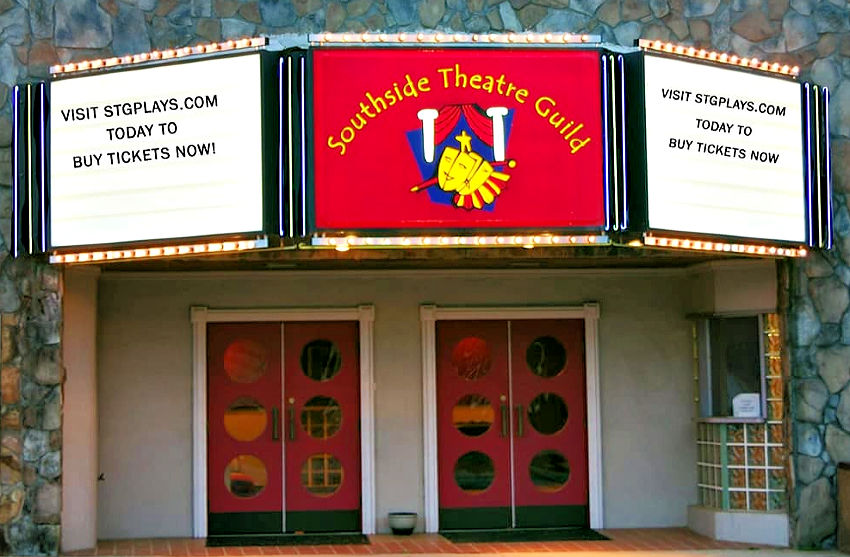 Southside Theatre Guild is pleased to announce the Fox Theatre Institute (FTI) has awarded the venue with a $75,000 historic preservation grant for complete replacement of the existing roof.  Atlanta-based FTI is the Fox Theatre’s dynamic outreach program offering historic preservation expertise, consultation and education to performing arts venues in Georgia and the Southeast.

“Wow! FTI has lifted a burden from our shoulders. Not only will this grant allow Southside Theatre Guild to continue its long history of providing quality productions through an all-volunteer community organization, but one of Fairburn’s historic buildings will be preserved,” said Jill Lucas, President of Southside Theatre Guild.

Southside Theatre Guild was formed in 1973 with the guidance of the Fairburn-Palmetto Junior Women’s Club, six-term Georgia House Representative Helen Selman, and Doris Russell, former Radio City Rockette and founder of the Doris Russell School of Dance.  The group first used the former Fairburn Scout Hut as its meeting and rehearsal space and performances were held in local school gymnasiums.

In 1975, the old movie theater in Fairburn became available and renovations began. The building was later donated to Southside Theatre Guild. The Guild is blessed to have the historic structure, but it requires a lot of tender loving care and maintenance.  Southside Theatre Guild has produced over 200 shows comprising roughly 1,800 performances and continues to produce a minimum of four shows per year.

Southside Theatre Guild’s mission is to benefit the South Metro Atlanta community by providing entertaining shows throughout the year and by giving local volunteers the opportunity to contribute and experience all the advantages of being involved in the theatrical arts.

“The receipt of this grant will allow Southside Theatre Guild to continue providing our community with entertainment and an outlet for creativity, artistic growth, and imagination to flourish, said Janet Reed, Director of Publicity.

Once threatened and saved itself by caring community members, the Fox Theatre created FTI, fostering a strong sense of togetherness, empathy, and insight that remains visible through its ongoing work. FTI pays it forward by helping other cultural institutions renew, reinvigorate and restore artistic vitality by offering financial assistance, restoration support and operations mentoring needed to leverage scarce resources and stimulate local economies.

“For over a decade, the Fox Theatre Institute has worked tirelessly to save and resurrect historic theaters throughout our state,” said Adina Erwin Vice President and COO of the Fox Theatre. “These historic landmarks hold immense cultural and economic significance in their communities, and we are passionate about ensuring these exceptional performing arts centers will be here to serve future generations.”

“Our donations and guidance extend beyond the physical repair of the buildings we serve,” said Leigh Burns, director of Fox Theatre Institute. “It inspires communities and acts as a catalyst for positive change in each neighborhood we touch.”

About the Fox Theatre Institute

The Fox Theatre Institute (FTI) is a dynamic outreach program offering historic preservation expertise, consultation and education to performing arts venues in Georgia and the region. Created by Atlanta’s Fox Theatre, an iconic attraction widely applauded for being a catalyst for positive change in the community, FTI pays it forward, helping other cultural institutions renew, reinvigorate and restore artistic vitality in their backyards and beyond. Keeping environmental and economic impact top of mind, FTI offers the financial assistance, restoration support and operations mentoring needed to leverage scarce resources and stimulate local economies. Not only that, but it keeps the artistic pulse of beloved communities beating for decades to come. FTI was recently featured on NPR’s Marketplace for its substantial impact on historical theatre restoration and community building throughout Georgia and the Southeast. For more information, visit www.foxtheatreinstitute.org.

About the Fox Theatre

Kicking off its 90th year celebration in 2019, the Fox Theatre is one of Atlanta’s premier venues for live entertainment, welcoming more than 250 performances a year in its 4,665-seat theater. From rock concerts and Broadway productions to ballets, comedy and movies, the historic venue attracts more than 500,000 visitors annually. The theater also boasts more than 10,000 square feet of private event space, hosting wedding receptions, trade shows, corporate meetings and association functions in its fabulous ballrooms, lounge and outdoor terrace. As a 501(c)(3) nonprofit arts organization, the Fox Theatre stands today as a fiercely protected landmark and a nationally acclaimed theater. The Fox Theatre proudly acknowledges its partners for their generous support: Coca-Cola, Lexus, Georgian Terrace Hotel, Georgia Natural Gas, Atlanta Beverage-Yuengling, Regions and Grady Health System. Tickets for all events are available at the Fox Theatre Ticket Office, online at FoxTheatre.org or toll free at 855-285-8499. Group sales information is available by calling 404- 881-2000 or visiting the Fox Theatre website. Stay connected with the Fox Theatre on Instagram, Twitter, Facebook and by using the hashtag #AtTheFox.