Peachtree City officials posted on the city website June 13 a form for city residents to express their opinions about a number of issues facing the city.

Better hurry up, though. Deadline for your answers is Monday, June 24, just 12 days after the posting.

“The City of Peachtree City is asking residents to participate in the 2019 Resident Survey,” according to the city’s website announcement. “Peachtree City conducts this survey every two to three years to gather resident input on satisfaction with city government services and to gather input for spending priorities in the coming years. Residents also have the ability to weigh in with comments and questions on issues not covered by the questions (if you do ask questions, please be sure to include your email or phone number to receive a response). The online survey will be open through Monday, June 24.”

Here are the questions on that online survey, technically known as a self-selecting survey, rather than a statistically valid random sample survey:

The survey asks for your street address, city and ZIP Code, presumably because only city residents are being surveyed.

It also asks for for your phone number and email address in the event you asked a question later in the space provided. If you don’t ask a question, you don’t have to fill in this information.

Then the survey asks a checkbox question about how you get “information about Peachtree City government, services, activities, events, and local issues.”

Next, the survey asks how you want to receive from the city “emergency updates, important news, events, and budget information”: Weekly email newsletter, Facebook, Twitter, Instagram, website updates, press releases to local newspapers, or other.

Next, if there’s at least one person over 50 in your home, the survey asks if there are any services specifically for seniors that are needed in the city. It also asks if any 50+ seniors in the home use Fayette Senior Services in Peachtree City and Fayetteville, specifically The Gathering Place, McIntosh Place and the Life Enrichment Center, and what you feel about the variety of programs and hours of operation at those locations.

Following that, the survey seeks to know your satisfaction level with the following: Police services, Fire and Emergency Medical services, code enforcement, traffic flow in getting around Peachtree City, street paving and maintenance, appearance along city roadways, stormwater and drainage maintenance, effectiveness of communication with the community, cart path paving and maintenance, litter removal on roads and paths, and another question about senior services.

Next, the survey wants to know how you feel about specific city facilities and services: Number of tot lots and playgrounds, number of athletic fields and courts, number of recreation facilities, number of community events and the hours of operation for the Kedron Fieldhouse-Aquatic Center and the city library.

Turning to your interaction with city staff, the survey asks you to rank staff’s helpfulness, courtesy, and knowledge.

Question 16 asks you to make three choices to the questions about what infrastructure is lacking or missing in Peachtree City.

The next list allows you to rate the city for dining options, recreation, shopping, as a place to raise children, to work, to live, to visit, to retire and the overall quality of life.

The next set of questions asks you about specific services the city spends your tax dollars on, whether you think the city spent too much or not enough and how the city should focus its spending in the next two years.

Here’s where your tax dollars meet the city’s future allocations for spending. You can expect this specific question and its answers to be relied upon in future city explanations of its spending decisions. Since the survey must be completed by June 24, it’s likely that the answers to these questions will provide justifications for the city’s spending in the upcoming budget adoption.

Now you’ve responded to 80 percent of the survey. The final fifth is about what you like most about living in Peachtree City, what you like least, what you see as the biggest challenges over the next 10 years and what advice — via check boxes — you would give city leadership about planning for the next 20 years.

Click “Done” and then find out what city leaders do with that information from this non-randomized, non-scientific survey. To be considered a statistically valid survey, it would have to select a random sample of the city’s population and quiz that sample. That method would give the survey results a statistical measure of how likely the answers actually represent the group as a whole.

Instead the survey is known as a voluntary, self-selected sample, meaning that those people with interest in or biases about the subject matter of the the questions are the most likely to respond. Thus interest groups can “load” a survey because those groups want the survey to produce a result favorable to their interests.

“A good sample selection is key as it allows one to generalize the findings from the sample to the population, which is the whole purpose of survey research,” according to the Wikipedia entry “Survey (human research).” 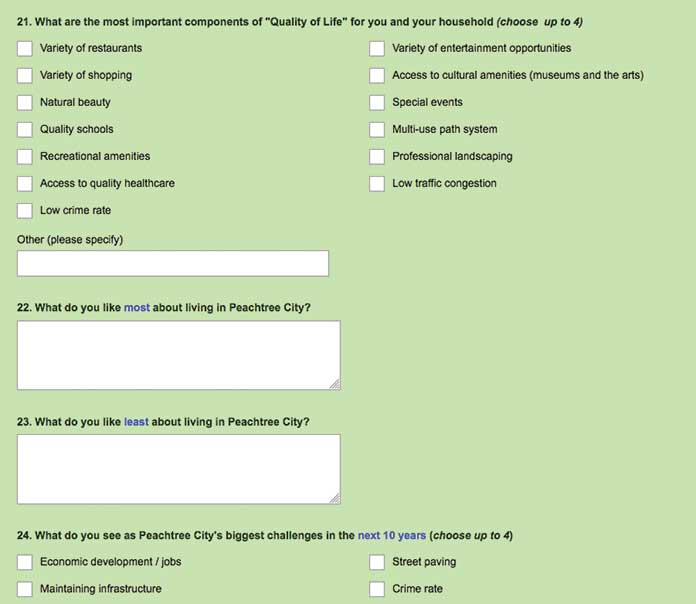